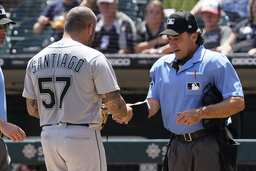 CHICAGO (AP) Just sweat and rosin. That is Hector Santiago's story, and he's sticking to it.

Santiago became the first player to be ejected as part of Major League Baseball's new foreign substance protocols when he was thrown out of the Seattle Mariners' 3-2 victory over the Chicago White Sox on Sunday.

Santiago was checked by the umpires as he exited in the fifth inning. His glove was confiscated, and it was later announced that Santiago had been ejected.

"He was ejected for when his glove was inspected, for having a foreign substance that was sticky on the inside palm of his glove," crew chief Tom Hallion told a pool reporter.

Santiago, a 33-year-old left-hander who began his career with the White Sox, said what the umpires found was a combination of rosin and sweat. He had used rosin to stop the sweat from dripping on both his arms on a humid day in Chicago.

"I think once they take it back and check, it's just sweat and rosin," Santiago said. "They're going to inspect it and all this science stuff and it's going to be sweat and rosin."

Major league umpires last week started regular checks of all pitchers for sticky substances used to get a better grip on the balls, but can also increase the spin of the balls and make hitting them more difficult.

Santiago could be suspended for 10 games, but there is an appeals process.

Taylor Trammell homered twice for Seattle, which improved to 10-2 in its last 12 games. Paul Sewald (5-2) got one out for the win, and Kendall Graveman worked the ninth for his seventh save.

The White Sox lost AL MVP Jose Abreu when he was hit on his left knee by a pitch in the sixth. The team announced the first baseman had a bruised left knee and X-rays were negative.

"You definitely never want to see that happen, especially to pretty much the backbone of the team," White Sox pitcher Dallas Keuchel said. "We're all hoping it's nothing major but we're already hampered as it is. We're all hoping for the best for Jose."

The teams played 2 1/2 innings Saturday before the game was postponed because of rain.

Trammell connected for his seventh homer in the fifth, and Ty France went deep against Keuchel in the sixth. Leury Garcia hit an RBI single in the fifth for Chicago, and Yasmani Grandal added a tying sacrifice fly in the sixth.

The Mariners went ahead to stay when Trammell hit a towering drive into the right-field bleachers with two out in the ninth against Liam Hendriks (3-2).

"Unbelievable game," Mariners manager Scott Servais said. "Taylor was locked in. That's one of the best closers in the game."

Grandal led off the bottom half with a base hit, but Jake Lamb flied out and Yermin Mercedes bounced into a double play.

The teams will play a seven-inning game for the series finale later Sunday.

Keuchel allowed six hits, struck out four and walked one in his first relief appearance since Aug. 6, 2013.

The AL Central-leading White Sox have dropped seven of eight.

White Sox: RHP Michael Kopech (strained left hamstring) will throw a simulated game on Monday, and manager Tony La Russa said the team will decide whether he is ready or needs a rehab stint with Triple-A Charlotte.

Mariners: Following an off day, RHP Chris Flexen (6-3, 3.87 ERA) starts Tuesday night in the opener of a three-game series against Toronto in Buffalo, New York. LHP Robbie Ray (5-3, 3.35 ERA) gets the ball for the Blue Jays.