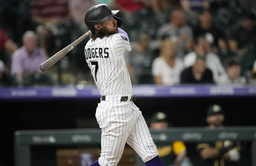 Mark Canha added three hits, including an RBI single for the Athletics, who won for the fifth time in seven interleague games this season. They improved to 4-1 on their six-game road trip, which concludes Sunday.

Brendan Rodgers, pinch-hitting for Rockies reliever Jhoulys Chacin, hit his first major league home run, a two-run drive off reliever Jesus Luzardo in the seventh. Charlie Blackmon had a pair of hits, including an RBI single.

Irvin (4-7) allowed six hits and one run in snapping a career high-tying four-game losing streak. He walked one and struck out five.

Lou Trivino got three outs for his eighth save. Irvin kept the Rockies off balance throughout his outing.

"They put the bat on the ball and it's not easy to pitch here for a reason, so I'm just trying to limit damage and put as many zeroes on the board as I can, especially when we're scoring the way we've been scoring," Irvin said. Oakland also clinched its 11th series win of the season and upped its road record to 18-8 for a winning percentage of .692 away from home, tops in the major leagues.

"Our team works very hard in the cage, batting practice, watching video, up and down our lineup," Pinder said. "We've got a lot of guys that like to work and get after it, even when we're scuffling, we're putting in the work and it pays off." Pinder's homer traveled 462-feet, longest homer by an A's player this season.

"I wasn't trying to do too much," he said. "It was a 3-1 count and I was just looking for a heater and trying to get it out over the plate and I just reacted to it. But it's always nice to hit a ball like that."

Kyle Freeland (0-1), making his third start of the season after beginning the year on the 10-day injured list because of a left shoulder strain suffered in spring training, went five innings and allowed five runs and 10 hits.

Canha double to open the game and one out later Olson connected for his 15th home run.

Pinder led off the top of the third by driving Freeland's 3-1 offering deep into the left field bleachers and the A's got another run on Matt Chapman's double-play grounder for a 4-1 Oakland lead.

Chapman had a sacrifice fly in the fifth and Canha added a ninth-inning single after Tony Kemp tripled. Rodgers became the ninth Rockies player to register his first career homer homer as a pinch hitter and it was a long time in coming for Rodgers, who made his big league debut two years ago but has been hampered by injuries. "It's been a lot longer than I would have expected since I made my debut, but I'm glad I got it out of the way," Rodgers said. "Running the bases, I don't really remember, but I think I ran them pretty fast. I didn't really know it was going (out) at first. I knew I hit it good, but I thought it was a little too high. But it carried out and for sure it's a good feeling."

Athletics: RF Stephen Piscotty was back in the starting lineup Saturday after sitting out Friday's game due to ankle soreness. Piscotty had a single in three at-bats.

Rockies: RHP Jon Gray has been placed on the 10-day injured list because of a right flexor strain and RHP Jordan Sheffield went on the 10-day IL with a right lat strain. LHPs Ben Bowden and Lucas Gilbreath were recalled from Triple-A Albuquerque to fill the roster vacancies.

Athletics: RHP James Kaprielian (2-0, 2.95 ERA) is slated to make his fifth career start since being recalled from Triple-A Las Vegas on May 12. It is the first time he'll be facing the Rockies.