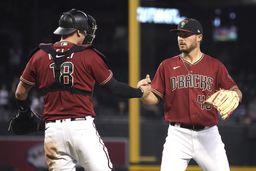 PHOENIX (AP) Ketel Marte hit a tying 457-foot home run in the third inning and go-ahead, two-run single in the fourth, helping the Arizona Diamondbacks stop a 13-game losing streak with a 9-2 win over the St. Louis Cardinals on Sunday.

Arizona, which overcame a 2-0 deficit, is just 19-35 and had been on the National League's longest losing streak since the Diamondbacks' 14-game skid in 2004.

"Glad that run is over," Arizona manager Torey Lovullo said. "We're 1-0 today, and that's all that matters."

The Diamondbacks had not celebrated in two weeks.

"It was pretty intense. I could hear it," Lovullo said. "It was a pretty emotional moment for those guys."

Matt Peacock (2-1) got his first big league win as a starting pitcher, throwing 78 pitches in his third career start. He gave up two runs and six hits in six innings, struck out six and walked none.

Josh Reddick had three hits and an RBI for Arizona, which took advantage of three errors to score two unearned runs.

"The boys needed it," Josh Rojas said. "When you are on a streak like that, everybody is thinking about it. Everybody knows it. It puts that much more pressure on every at-bat, every play and every pitch, because you are thinking about how much we need a win.

"When you get that win out of the way, you can be back to playing free and just playing the game."

Carlson's first-inning homer and Knizner's RBI double in the second build a 2-0 lead, and Tim Locastro's RBI single in the second and Marte's third homer this season tied the score.

Marte's single after he fouled off five pitches in a nine-pitch at-bat put Arizona ahead 4-2.

"It was the right man in the right spot," Lovullo said. "We have a lot of those moments that we haven't been capitalizing on. One of the best hitters on our team just not giving in. A quality at-bat by a quality hitter."

Shortstop Edmundo Sosa's second error of the game, when dropped the ball while trying to take it out of his glove on Locastro's leadoff grounder, led to to a five-run sixth.

Eduardo Escobar had an RBI single off Webb, Christian Walker and Reddick hit run-scoring singles against Jake Woodford and Nick Ahmed' had an RBI grounder that third baseman Jose Rondon threw past first for the Cardinals' third error.

St. Louis regulars Nolan Arenado, Yadier Molina and Tommy Edman - three of the top five hitters in the order - were given the day off as the Cardinals played their 10th straight game in a stretch of 17 in a row.

"It makes sense to give them a day off their feet," St. Louis manager Mike Shildt said.

No. 5 hitter Molina was 6 for 15 with four RBIs in the first three games of the series, cleanup hitter Arenado was 3 for 13 with a homer and three RBIs and leadoff man Edman was 4 for 12 and reached base seven times. Edman flied out as a pinch hitter Sunday.

RETURN OF THE PEACOCK

Peacock has been forced to miss his previous scheduled start earlier in the week because of an illness.

"It was either food positioning or some kind of stomach bug," Peacock said. "I'm glad my wife lives with me, because I would die, I'm pretty sure."

Peacock is a strong candidate to remain in the rotation, Lovullo hinted.

"It started with Matt Peacock" Lovullo said of Sunday's victory. "He was on the attack."

LHP Caleb Smith will start to start Tuesday against the New York Mets, his first start since the third game of the season April 3. Arizona has used 11 starters this season, tied for the second-most in the majors.

Cardinals: LHP Andrew Miller (right toe blister) is to make a fourth rehab appearance at Triple-A Memphis on Tuesday before rejoining the Cardinals when they return to St. Louis on Thursday. ... RHP Kody Whitley (back) was placed on the injured list Sunday. RHP Seth Elledge will be recalled and will join the team in Los Angeles on Monday.

St. Louis RHP Jack Flaherty (8-1, 2.54 ERA) is to oppose Dodgers RHP Trevor Bauer (5-3, 2.07) in a matchup of aces Monday in the opener of a three-game series in Los Angeles. Flaherty leads the majors in victories and Bauer is tied for the second in the majors with nine quality starts.

Arizona RHP Merrill Kelly (2-5, 4.84) is to face New York Mets RHP Jacob deGrom (3-2, 0.80) in the opener of a three-game series at Chase Field. DeGrom will make his second start since returning from the injured list after recovering from tightness in his right side.