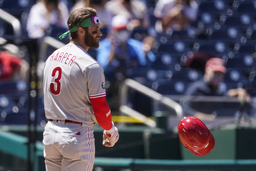 Washington had dropped seven of eight to sink to a season-low six games under .500 before salvaging the finale of the three-game series.

Philadelphia missed a chance to move four games over .500 for the first time since it was 5-1.

Corbin (2-3) allowed one run in seven innings, giving up five hits while striking out a season-high nine. Since allowing 15 earned runs in 6 1/3 innings over his first two starts, Corbin is 2-1 with 3.00 ERA over five outings and has reduced his season ERA from 21.32 to 6.19.

"He was really good," manager Dave Martinez said. "His slider was the best I've seen all year."

The Phillies put multiple players on base just once after the first inning, when they opened the eighth with a double and a walk. Jean Segura flew out against Tanner Rainey before Daniel Hudson entered. The reliever struck out Bryce Harper to the delight of Washington fans who booed the former National and 2015 NL MVP throughout the series. Rhys Hoskins then grounded out to end the threat.

Harper, who signed a $330 million, 13-year contract with Philadelphia in 2019 after playing his first seven seasons with the Nationals, went 1 for 4 with three strikeouts.

The Nationals scored a combined four runs in the first two games of the series, then matched the total in the first inning against Zach Eflin (2-2). Schwarber ripped a two-run blast into the left seats, and after Starlin Castro walked, struggling first baseman Josh Bell drilled Eflin's pitch three rows deep into the second deck in right field.

"That was by far the best swing of the year," Bell said. "Most connected, most behind it. Best ball flight, for sure. Hopefully, more to come."

Washington didn't get another runner past first until the sixth, when Castro delivered an RBI double. Eflin allowed five runs on seven hits in six innings while striking out nine. He has pitched at least six innings in each of his eight starts this season.

"It's one of the hard things to do as a starting pitcher is to give up a good amount of runs in the first inning and still put innings," Eflin said. "As soon that happens, the mentality is just `Eat innings, eat innings.' I was able to get up to six innings, but they did their damage in the first.'"

Philadelphia scored its only run on Andrew McCutchen's steal of home in the first. Corbin attempted to pick off Harper, but McCutchen broke for the plate and beat Bell's high throw. It was the Phillies' first steal of home since Roman Quinn did it June 21, 2019, against Miami.

Phillies: Philadelphia placed C J.T. Realmuto on the COVID-related injured list and recalled C Rafael Marchan from Triple-A Lehigh Valley. "He was under the weather in the middle of the game last night, so when you're under the weather in today's world, you immediately go into COVID protocols," manager Joe Girardi said. "We're hoping maybe we get him back tomorrow or the next day after he goes through all the protocols." . SS Didi Gregorius, who left Wednesday's game with right elbow stiffness, was out of the lineup.

Nationals: Martinez said RHP Stephen Strasburg (shoulder inflammation) will not be activated from the injured list until he throws another simulated game or makes a minor league rehab appearance. Strasburg was scheduled to throw a bullpen session Thursday.

Phillies: RHP Vince Velasquez (1-0, 4.18 ERA), who is 1-0 with a 1.59 ERA in his last two starts, gets the ball as Philadelphia begins a three-game series against the Blue Jays in Dunedin, Fla.