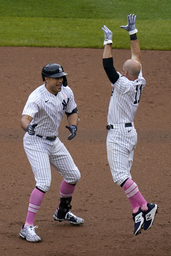 After consecutive walk-off wins over the Washington Nationals, the Yankees felt ready for a trip to Tampa Bay, their biggest nemesis in recent years.

"It hasn't been in our favor against them lately," Stanton said after his ninth-inning single off Brad Hand gave New York a 3-2 win Sunday. "We need to change that."

New York (18-16) completed its longest homestand this season with a 7-2 record. The AL champion Rays have won 18 of the last 23 meetings going into Tuesday's series opener, including a five-game victory in last year's Division Series.

A three-game sweep by the Rays in the Bronx from April 16-18 dropped the Yankees to a season-worst 5-10 record.

"Last year during the regular season, they beat us up," New York manager Aaron Boone acknowledged. "They're obviously very good at preventing runs. They've got versatility in their lineup. So they're a challenge, and you've got to play well if you're going to beat them."

Hand walked his first batter for the second straight day, Tyler Wade, on four pitches and then walked pinch-hitter Aaron Judge on a full count.

DJ LeMahieu, who wore pink-tinted sunglasses before rain started, grounded to Starlin Castro. Rather than step on third to force the lead runner, Castro threw to second for a possible double play and LeMahieu beat second baseman Josh Harrison's throw for first, leaving runners at the corners.

Stanton fell behind 1-2, took a slider in the dirt, then lined a high slider for the Yankees' fifth hit of the game and his 24th RBI this season. Stanton has seven walk-off hits, including two for the Yankees.

"When you win those games that are down to the wire, it's big," Stanton said. "The way you find wins and the way you scrape them out, it pays off and it helps the flow of getting these wins in series."

"These past two days, I've really just kind of beat myself, giving up the free baserunners there to begin the inning," Hand said. "You just can't keep falling behind hitters like that."

New York built a 2-0 lead on Aaron Hicks' RBI single in the third and Torres' solo homer in the sixth, a 411-foot drive into the left-field bleachers. Torres pumped a fist leaving the plate.

"You know how bad he wanted it," Stanton said. "You could tell in his reaction."

Torre had not homered in 136 plate appearances this season, and had not gone deep since last Sept. 17 against Toronto.

"I'm just so happy to hit one for my mom," said Torres, who recalled hitting three minor league homers on Mother's Day. "Before I left the house, I told her, `I'll do something for you.'"

Torres said his mom, Ibelise Castro, planned to meet him in Tampa, Florida, this week.

Kyle Schwarber tied the score in the seventh with a two-run homer into the right-field second deck on Domingo German's final pitch. Josh Bell had doubled leading off, ending a string of strikeouts in seven straight at-bats.

A day after returning to right field for the first time since April 19, Juan Soto was 0 for 4 as the designated hitter and dropped to 2 for 12 in the series. He had homered as Washington won Friday in his return from a 10-game layoff caused by a strained shoulder.

Miguel Andujar swapped eye black for eye pink. He went 0 for 3 and was optioned by the Yankees to Triple-A Scranton/Wilkes Barre after going hitless in nine at-bats over three games.

New York's win Saturday after being held down by Max Scherzer was rare, making teams just 13-104 since 1901 when striking out 14 or more times while held to two hits or fewer against a starting pitcher.

Yankees: 1B Luke Voit (left knee surgery March 29) probably will be activated Tuesday. Voit was 7 for 18 (.389) during a rehab assignment at Triple-A Scranton/Wilkes-Barre, hitting his third homer and a two-run double Sunday at Syracuse. ... Hicks stayed in after fouling a pitch off his shin in the eighth and falling in pain. ... Judge, in a 2-for-24 slide and dealing with what Boone called "lower leg stuff," was given the day off from the starting lineup. "Just trying to be proactive," Boone said. "Hopefully this is something that keeps him strong physically." ... 3B Gio Urshela (sore left knee) and 2B Rougned Odor (sprained left knee on May 4) took grounders before the game. Urshela could be back in the lineup Tuesday.