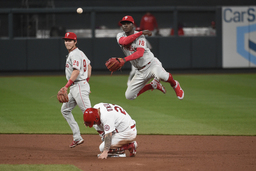 ST. LOUIS (AP) Andrew McCutchen returned to the lineup and drove in the go-ahead run, helping the Philadelphia Phillies beat the St. Louis Cardinals 5-3 Wednesday night after Bryce Harper was hit in the face by a pitch.

Harper left the game in the sixth inning after getting hit in his left cheek on a 96.9 mph fastball from left-handed reliever Genesis Cabrera (0-1).

Harper posted a video on Instagram that said: "Everything came back good. The face is still there. See ya soon."

The All-Star slugger picked himself up and walked off the field, blood dripping from a cut near the side of his nose.

"He went to the hospital to get a CT scan. We're awaiting the news. We just pray that everything is OK there. We hope there's no fractures," Phillies manager Joe Girardi said. "He was bleeding. He's a tough character. Say a prayer."

Cabrera hit the next batter, Didi Gregorius, with a 94 mph fastball. Girardi came out of the dugout to complain to plate umpire Chris Segal and was ejected.

"I've been hit in the face, broke my nose. It's scary," Girardi said. "I don't think he did it on purpose. I'm not saying that. But for the protection of the players, he has to go."

Cabrera, through translator Antonio Mujica, expressed remorse for his pitching.

"I'm very sorry for Bryce Harper," Cabrera said. "I want to again to apologize to all of the action that happened, especially to Harper. I really wish him the best and I hope he has a speedy recovery. The game got away from me. I'm really sorry for everything that happened. It was not intentional."

Under the three-batter minimum rule for relievers, Cabrera had to stay in. McCutchen followed with his RBI single.

"Man, that was tough watching that," McCutchen said.

St. Louis manager Mike Shildt said he would have pulled Cabrera if he could have.

"It was a tie game. It was right in his spot," Shildt said. "It was completely unfortunate the ball got away from him. Our prayers are with Bryce Harper and we hope he's OK.

"It's a failure of the three-batter minimum. Completely, absolutely no doubt. You're talking about an aggressive young pitcher throwing to one of the superstars of this game. Clearly, he felt terrible. Everybody knows it was completely unintentional."

The Phillies added their final run in the seventh on a sacrifice fly by Gregorius.

Brad Miller's two-run homer to right field with two outs in the fifth tied it at 3. Phillies backup catcher Andrew Knapp had an RBI single to scored Gregorius in the second for the first Philadelphia run.

Paul Goldschmidt hit a solo homer with two outs in the third. St. Louis took a 2-1 lead in the second when Tyler O'Neill, who went 3 for 4, hit a two-run homer.

Hector Neris pitched the ninth, picking up his fifth save.

Cardinals starter Johan Oviedo made his first start of the season and his second appearance. He pitched five innings, striking out seven and allowed three hits and three runs.

The Phillies gave Vince Velasquez his second start of the season, filling in for Matt Moore, who is recovering after being in COVID-19 protocol. He pitched 4 1/3 innings, allowing three runs on five hits, including two home runs.

The Cardinals optioned OF Scott Hurst to the alternate training site to make room for Oviedo. Hurst likely will be playing for Triple-A Memphis when the minor league season begins next week.

Girardi gave 3B Alec Bohm and C J.T. Realmuto the day off. Bohm delivered a pinch-hit double in the seventh, scored and stayed in the game. Bohm's parents were in attendance.

Phillies: McCutchen was back in the lineup after being held out for the first two games of the series in St. Louis. He was moved down to fifth in the batting order after being the leadoff hitter in his previous 18 starts. He entered the game hitting .154.

Cardinals: Backup C Ali Sanchez, 24, is up because Yadier Molina (foot) went on the IL. He was acquired by the Cardinals for cash considerations from the New York Mets in February.

Phillies: RHP Aaron Nola (2-1, 2.84) threw a two-hit shutout in his earlier start this season against St. Louis, went seven solid innings in his last start, a 7-5 win over Colorado.

Cardinals: LHP Kwang Hyun Kim (1-0, 4.15) will make his third start of the season. In his last start, Kim hurled 5 2/3 innings and allowing one run on five hits and eight strikeouts against Cincinnati. He did not walk a batter.