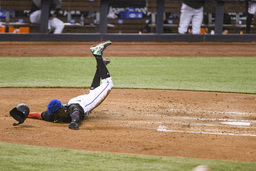 MIAMI (AP) Starling Marte had four hits and the Miami Marlins beat the Tampa Bay Rays at home for the first time since 2018 with a 12-7 victory Saturday night.

Tampa Bay, the reigning American League champion, won 11 of the previous 12 matchups between the Sunshine State rivals over the past three years. Miami was 0-7 against the Rays at home since a 3-0 victory on July 4, 2018 - including losses in the first two games this season.

But the Marlins broke loose with 14 hits Saturday in their first win of 2021.

"It speaks to the volume of the lineup we have," Cooper said. "Everyone is out there battling. Tonight you saw different guys coming through."

The Marlins, who trailed 6-4 after 4 1/2 innings, tied it in the fifth and pushed ahead with three runs each in the seventh and eighth.

"Not that we're going to go out and score a ton of runs every night, but I do think we're pretty balanced up and down the lineup," manager Don Mattingly said. "We kind of broke the ice last night, and we continued that trend tonight."

Cooper singled home Rojas in the seventh, and Jon Berti ripped a two-run single with two outs to make it 9-6. Berti also doubled in the second.

Duvall, signed as a free agent in February, launched his first home run with Miami to left-center in the eighth. Marte hit an RBI triple and Cooper, who finished with three hits, added a run-scoring double.

"It was a fabulous game for us," Marte said. "We're competing all the time. We're doing our job and making good decisions at the plate."

Manuel Margot, Joey Wendle and Yandy Diaz all had two hits for the Rays, and Mike Zunino homered.

Rich Hill gave up four earned runs over four innings in his first start with Tampa Bay. The 41-year-old lefty struck out four and walked two.

An ailing Elieser Hernandez made it through just 2 1/3 innings for the Marlins, who needed six relievers to finish the game. Richard Bleier (1-0) earned the win with a scoreless seventh.

Marlins: Hernandez exited with inflammation in his right biceps tendon. He struck out three and did not walk a batter while throwing 23 of 34 pitches for strikes.