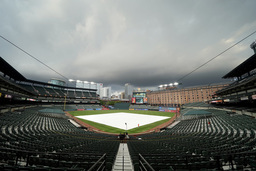 BALTIMORE (AP) The Baltimore Orioles successfully finished what they started, beating the Washington Nationals 6-2 on Friday in a game suspended five days earlier because of a tarp malfunction at another ballpark.

Baltimore led 5-2 in the top of the sixth Sunday at Nationals Park when rain halted play. The grounds crew failed to get a tangled-up tarp out in time to prevent the infield from becoming an unplayable quagmire that could not be dried.

The game resumed Friday at Camden Yards with the Nationals serving as the home team prior to the opener of a three-game series at Baltimore.

"It's a little strange. We're in a visiting ballpark with the white uniform on. So it's different," Nationals manager Dave Martinez said. "We got to hit last, so that was different."

Wearing their road gray uniforms, the Orioles secured a better-late-than-never victory that stretched their winning streak to six. The surge began with wins on Friday and Saturday in Washington and continued with a three-game sweep in Philadelphia.

"It was definitely strange having to wait five days for that one," Orioles catcher Bryan Holiday said. "I'm glad we were able to get that in and seal the deal."

As it turned out, the Orioles swept the Nationals, too. It just took an unusually long time to get it done.

When play resumed, the Orioles had two on and one out in the sixth. Holaday delivered a run-scoring single to make it 6-2, giving him two RBIs in the game - each five days apart.

After the final out, the threat of rain forced the Orioles grounds crew to bring out the tarp. They performed the task flawlessly, and the shower started moments later.

Coming off a a 108-loss season, Baltimore swept the defending World Series champions in a game that took nearly a week to complete. That wasn't the only thing unusual this game, either.

It was the second time during this anything-goes season the Orioles played the role of the road team while at home. They dropped a pair to Miami as the "visitors" earlier this month.

Before the rain came Sunday, Baltimore got two RBIs apiece from Hanser Alberto and Anthony Santander in a five-run fifth against Stephen Strasburg (0-1). It was the first outing of the season for Strasburg, whose second start was to come Friday night.

Travis Lakins (2-0) got the victory by retiring the only batter he faced to end the fourth inning.

Starlin Castro hit a two-run homer for the Nationals, who are off to a 6-10 start.

Nationals: RHP Ryne Harper was the 29th man in the second game after being optioned to the team's alternate in the afternoon to make room for 29-year-old RHP Dakota Bacus, who retired all six batters he faced in his major league debut.

Orioles: Selected the contract of RHP Chandler Shepherd and optioned RHP David Hess to their alternate site at Double-A Bowie.

Nationals: LHP Sean Doolittle (10-day IL, right knee) is going to wait a bit before he pitches off a mound. "I kind of want his knee to feel fine before he starts throwing," manager Dave Martinez said. "We don't want him to develop any bad habits." ,,, Castro left for a pinch hitter because he hurt his wrist, which Martinez said was pretty sore. Castro went to get X-rays.

Nationals: Strasburg got off to a late start this season because a nerve issue in his right hand, a problem he's still managing. "Based on our conversations with him, he feels like he can work through this injury," Martinez said.

Orioles: Tommy Milone (1-1) was slated to pitch for the Orioles. He blanked Washington over six innings last week.