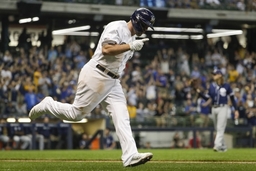 MILWAUKEE (AP) Mike Moustakas used one swing of the bat to give the Milwaukee Brewers' playoff push a big boost.

Moustakas hit his 35th home run of the season, Lorenzo Cain also went deep and the Brewers beat the San Diego Padres 3-1 on Tuesday night with their 11th win in 12 games.

"Moustakas, he's always coming up with big homers," Cain said. "I've been seeing it for a long time now, especially back in our KC days. He has the power. He always hits 20, 30 homers every single year. So, I don't expect anything less. He's definitely been huge for us all year long."

The Brewers pulled even with the Chicago Cubs for the NL's second wild card and both trailed first-place St. Louis by two games in the NL Central.

Manager Craig Counsell likes how everybody is contributing during this late-season charge.

"We're doing our jobs," he said. "You feel like if we post a good record, a good game every day for these last 11-12, we'll find ourselves in a pretty good spot."

Moustakas teed off on a 1-2 pitch from reliever Matt Strahm (5-9) in the bottom of the seventh after Hunter Renfroe's 32nd home run in the top of the inning tied the score at 1-1.

"It's a big moment because we kind of lose the momentum a little bit with the game tied and everybody pitching so well," Counsell said. "But, he took it right back, I thought, and it's a huge spot."

Renfroe, who had missed nine games with a sprained left ankle, connected off Matt Albers (8-5) and spoiled the six scoreless innings crafted by three Milwaukee pitchers.

Brandon Woodruff started, struck out four and walked one in the first two innings. Gio Gonzalez allowed two hits and struck out four over the third, fourth and fifth. Brent Suter retired the side in order in the sixth, striking out two.

Drew Pomeranz struck out the side in the eighth and pitched a 1-2-3 ninth for his second save in as many chances.

Padres rookie right-hander Chris Paddack made his 26th start of the season and first against the Brewers. He allowed one hit, Cain's solo shot in the third, walked one and struck out nine in five innings.

Paddack knew he made a mistake on the pitch to Cain.

"One pitch I'd take back was the Cain at-bat," Paddack said. "I just kind of got away from myself. We were trying to stay stubborn, and I just made a mistake. I left that fastball right over the middle. He already saw six before that and it's hard to blow 94 (mph) by a veteran hitter like that."

The Padres matched a season-high with their sixth straight loss.

Manny Machado had an infield single and Paddack added a base hit.

Padres: LF Wil Myers was scratched and replaced by Nick Martini in left. No reason was given for the change, but Myers struck out pinch-hitting in the eighth. ... C Francisco Mejia (right oblique strain) was reinstated from the 10-day injured list. He was available to pinch hit or catch.

Brewers: Woodruff was reinstated from the 10-day injured list (left oblique strain) prior to the game. ... C Manny Pina (mild concussion) was cleared to play by the doctors from MLB. He's been out since taking a foul tip off his mask Sept. 5th. ... 2B Keston Hiura (strained left hamstring) was back in the starting lineup. He had only pinch hit twice since being reinstated from the 10-day injured list Sept. 11th.

Manager Andy Green said that Myers was scratched from the starting lineup because of an arm issue.

"He was fine to hit, but his arm was hanging a little bit," Green said. "He's played through it the last three or four days and it was bothering him a quite a bit today. He thought he was gonna be able to go, but he wasn't really able to throw the baseball. So, we used him as a pinch-hitter today. Hopefully, he's back in there tomorrow."

"I didn't think I was going to go back out there a second inning," he said. "I gave it all I had the first inning (the 8th) and came back in. He (Counsell) said, `Keep going.' My focus is getting outs. So, it was three more outs."

It was Renfroe's first home run since August 10 against Colorado and his first on the road since Aug. 1st at the Los Angeles Dodgers.

The Padres are 13-19 against the NL Central and 18-52 when scoring three or fewer runs.

Padres: RHP Dinelson Lamet (2-5, 4.06) makes his second career start against the Brewers. He's allowed no more than three earned runs in 10 of his 12 previous starts this season.

Brewers: RHP Adrian Houser (6-6, 3.84 ERA) makes his second appearance and first start against the Padres this season. He tossed 3 1/3 scoreless innings in relief on June 19th at Petco Park.