With Fenway trip next, Yaz sprints home to lift Giants 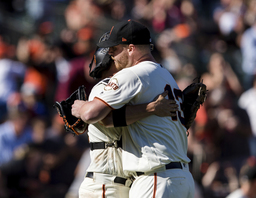 SAN FRANCISCO (AP) On the eve of an anticipated trip to Boston, Mike Yastrzemski came through once again for the San Francisco Giants.

The grandson of Hall of Famer and Red Sox great Carl Yastrzemski, who was languishing in Baltimore's minor league system at the start of spring training, Yastrzemski has emerged as a building block player for the Giants, who open a three-game series in Fenway Park on Tuesday.

"It's special in the sense of the history of the game with my grandfather there. It's going to be pretty emotional and I'm going to try to contain those things, try to make it feel like it's any other game," Yastrzemski said.

"I've gotten to play against the Red Sox in spring training and they gave me a nice, warm welcome, so I'm not expecting anything, but I assume it'll be something like that."

"He's got some of those qualities you like that may not show up on the spreadsheet, but he's good and he brings it every day," manager Bruce Bochy said.

Dubon homered leading off the third against starter Elieser Hernandez to break a scoreless tie. The 25-year-old rookie connected on a 1-0 slider that just cleared wall in left for his third homer.

Cueto gave up three hits, struck out two and walked two. The two-time All-Star has combined for 10 innings of four-hit ball in his two starts since coming off the injured list.

"I'm happy with the way things are going," Cueto said. "I feel healthy and I just want to continue working on what I need to work on for next year."

Giants reliever Tyler Rogers (2-0) struck out one in a 1-2-3 eighth for the win, and Will Smith worked around a walk and a wild pitch in the ninth for his 33rd save in 37 tries. The All-Star closer had been out since Sept. 6 with back tightness.

Jon Berti had two hits and one RBI and made a great defensive play for the Marlins, who have lost six of seven and are 11-34 since July 30.

Hernandez struck out a career-high nine in five innings of three-hit ball. He gave up one run and walked one.

"He got pretty good counts and was aggressive," Marlins manager Don Mattingly said. "I thought his stuff looked good today. He kind of shows you who he is and he's going to give you velocity as far as what you see, but the thing about him is that is that he was a Rule 5 guy last year and to this year, he's come a long, long way. And he's still a young kid."

The Marlins tied the game in the seventh on Berti's two-out, RBI single, which scored Magneuris Sierra from third. Sierra reached on a two-out infield hit and went to third on Longoria's throwing error from third.

Giants first baseman Belt bunted down the third base line against the shift for a hit leading off the sixth.

Berti made a leaping catch in left field, crashing into the top of the wall to rob Longoria of extra bases in the bottom of the first.

Marlins: RHP Jordan Yamamoto (right forearm strain) will pitch in an instructional league game on Monday and could join the rotation before the end of the season, manager Don Mattingly said.

Giants: OF Alex Dickerson (right oblique) appeared in Sunday's game as a pinch hitter and struck out in his only at-bat the fifth. Dickerson hadn't played since Sept. 3. ... Center fielder Kevin Pillar got an off day. . RHP Enderson Franco was selected from Triple-A Sacramento. . LHP Tony Watson (left wrist fracture) was placed on the 60-day injured list.