Pirates take fight to Giants, Vázquez closes out 27th save 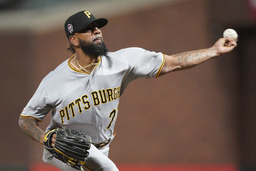 SAN FRANCISCO (AP) Through a long, losing season, the Pittsburgh Pirates have learned to celebrate each other for even the small accomplishments and try to push forward from the times of turmoil - like this week's embarrassing clubhouse fight between a pair of relief pitchers.

Felipe Vazquez earned his 27th save two days after punching Kyle Crick in the clubhouse as the Pirates beat the San Francisco Giants 6-3 on Wednesday night. Pittsburgh got a welcome lift after Crick required season-ending finger surgery Tuesday following the scrap with Vazquez before Monday's win, which prompted a team meeting.

Since an injury-plagued month of May for manager Clint Hurdle's club, there have been so many other issues.

"There's been some more miles on the tires since then," Hurdle said before the game, when Pittsburgh went through extra defensive skill work.

Cole Tucker hit an RBI double for a key insurance run in the sixth, and Jose Osuna added a pair of doubles.

A night earlier, the Pirates lost 5-4 after taking the series opener in comeback fashion Monday 6-4.

Jaylin Davis singled home a run, Corban Joseph had an RBI groundout and Mauricio Dubon drew a bases-loaded walk as the Giants got on the board in the fifth against starter Dario Agrazal before winner Michael Feliz (3-4) took over.

"Between walks, errors, we gave up some cheap runs and it came back to haunt us," Giants manager Bruce Bochy said. "Offensively we didn't do much."

Adam Frazier and Kevin Kramer hit RBI singles in the second for the Pirates, who are 13-6 over their last 19 in San Francisco. Giants righty Logan Webb (1-2), making his fifth major league start, threw a pair of wild pitches that inning and was done after 4 2/3.

Stephen Vogt started a second straight day at catcher for San Francisco after hitting a two-run homer and driving in four runs in Tuesday's 5-4 win. Bochy had planned to start Buster Posey either Wednesday or Thursday, so he will be behind the plate Thursday afternoon.

Former Giants and Pirates right-hander Ryan Vogelsong returned to the ballpark and wore his old Giants uniform to observe and work with San Francisco pitching coach Curt Young and the pitching staff.

"It's good to see Ryan, isn't it?" Bochy said, noting it's more about "really just to have him around. He's good for the players talking baseball. He's got a great way about him. He provided leadership when he was here."

Pirates: RHP Joe Musgrove (9-12, 4.67 ERA) threw on flat ground and the Pirates determined he would be fine to start Thursday against the Giants after he was scratched last Friday because of pain in his right foot. He hasn't pitched since Aug. 31 at Colorado. ... CF Starling Marte was out of the lineup for a third straight game nursing a tender left wrist. He is limited to pinch running. ... RHP Nick Burdi underwent forearm surgery Wednesday in Dallas performed by Dr. Keith Meister. Burdi is expected to be fully healthy by the start of spring training.

Giants: RHP Reyes Moronta's shoulder surgery in Los Angeles on Tuesday went better than expected. Doctors repaired his labrum but the capsule didn't need a fix. ... RHP Johnny Cueto played catch a day after pitching five scoreless innings in his first start since July 28 last year and returning from Tommy John surgery. His next outing is scheduled for Tuesday at Boston. ... 3B Evan Longoria had the night off.