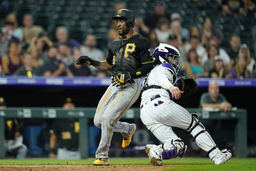 Cabrera hit a three-run homer and Dario Agrazal pitched three-run ball into the sixth inning, leading the Pittsburgh Pirates past the Colorado Rockies 9-4 on Friday night.

Marte singled and Bell walked to start the Pirates' fifth. One out later, Cabrera drove a 1-1 pitch from Antonio Senzatela into the second deck beyond the right-center field fence for his seventh home run of the season, giving the Pirates a 6-2 lead.

"It was a slider," Cabrera said through an interpreter. "I don't know how I hit the ball, but I'm glad it was a home run and we won the game. I was just ready to hit. I just saw it and I made good contact."

Senzatela said he threw the same pitch to Cabrera in his previous at bat - a slider down and in - and got him to hit a grounder back toward the mound, though the Rockies' pitcher made an error on the throw to first that allowed Cabrera to reach.

Trevor Story hit his first career leadoff homer, the seventh by a Rockies player this season and the first since Charlie Blackmon did it July 21 in New York against the Yankees. Ian Desmond had three hits, including a home run, as the Rockies fell to 2-10 in their last 12 games.

Agrazal (4-3) allowed three runs on nine hits, settling down to keep the Rockies in check after Story's leadoff homer. He walked none and struck out two.

"He gave us a very blue collar effort to get into the sixth," Pirates manager Clint Hurdle said after his club won for the sixth time in eight games. "Our starting pitching really has taken a step forward. We've gotten efficient bullpen work. We've had some hiccups but overall the pitching has gotten better. And we've played defense and started swinging the bats very well."

Agrazal, who helped himself with a sacrifice fly in the second inning, allowed a double to Desmond and RBI single to Sam Hilliard to start the sixth. He was lifted for Richard Rodriguez, who retired the next three batters to get out of the inning.

Senzatela, who failed to get out of the second inning in his last two starts, labored through five innings. Senzatela (8-9) allowed 10 hits and six runs, struck out two and walked one in losing a third consecutive decision.

Leading 6-3 going into the top of the seventh, the Pirates got four straight hits off Carlos Estevez, including an RBI single by Bell and loading the bases with none out. But they only added one more run in the inning after Adam Frazier ground into a double play and Elias Diaz was caught in a rundown after singling to drive in the second run.

Desmond homered off Francisco Liriano in the Rockies' eighth.

The game was delayed for 16 minutes between the second and third innings because of lightning in the area.

Pirates: Joe Musgrave (8-12, 4.67 ERA) is facing the Rockies for the second time in his career. He allowed two runs - one earned - in seven innings in a 2-0 setback to Kyle Freeland and the Rockies a year ago.

Rockies: RHP Tim Melville (1-0, 0.75 ERA) has allowed one run over 12 innings in his first two starts for Colorado.