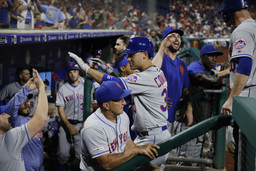 Frazier hit a pair of three-run homers and tied his career-best with six RBIs, and the New York Mets beat the Philadelphia Phillies 11-5 Friday night, snapping a six-game losing streak.

The Phillies fell 3 1/2 games behind the Cubs for the second wild-card spot in the NL. The Mets are five games back.

Five of Frazier's 18 homers this season are against the Phillies.

"Sometimes you can tell when guys are coming out of it, and I had a feeling he would be," Mets manager Mickey Callaway said. "This guy, he comes to play every day. Good results, bad results, he just wants to win. So I'm happy for him. That was big."

Pete Alonso led off the eighth with a single off Mike Morin (1-1) and Conforto reached on an infield single. After J.D. Davis popped out, Joe Panik walked to load the bases. Amed Rosario then lined a two-run single up the middle to give the Mets a 3-1 lead. Jared Hughes came in and Frazier ripped his 17th homer to left to make it 6-1.

Conforto's two-run shot off Edgar Garcia in the ninth was his 28th this season and 18th in his career against Philadelphia. Frazier connected a few batters later for his 10th career multihomer game.

Nola allowed one run and four hits, striking out seven in 6 1/3 innings.

"Every game is so valuable right now, especially when Nola pitches," Phillies manager Gabe Kapler said. "We have to support him early. It's very disappointing. When Nola pitches, we expect to win."

Nola took a two-hitter into the seventh before running into trouble. He walked Davis to start the inning and Panik singled. After Rosario popped out, Frazier was hit by pitch to load the bases. Pinch-hitter Wilson Ramos lined an RBI single that tied it at 1 and extended his career-best hitting streak to 23 games.

Jose Alvarez replaced Nola and retired pinch-hitter Rajai Davis on a liner to shortstop and Jeff McNeil on a popup.

"It's frustrating," Nola said. "The seventh inning hurt me."

The Mets were happy to see him gone.

"You just understand he's making his pitches, but hopefully you can get him out before nine and beat up on the bullpen," Callaway said. "That's exactly what our team did."

J.T. Realmuto had two sacrifice flies for the Phillies.

Mets: 2B Robinson Cano will begin a rehab assignment Saturday at Class A Brooklyn. Cano suffered a torn left hamstring four weeks and was expected to miss between six to 12 weeks. There's still no timetable for his return.