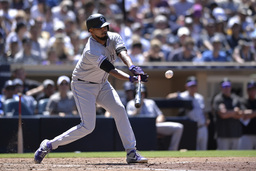 SAN DIEGO (AP) It has been a while since the Colorado Rockies played a game like this one.

Marquez (11-5) gave up three runs and five hits, struck out nine and walked two. He also hit an RBI single in the sixth and had two sacrifice bunts.

Marquez said his mindset was "to keep the ball down and go as far as I can."

The right-hander improved to 3-0 against San Diego this season and 7-3 on the road overall.

"He's especially tough away from Coors Field," Padres manager Andy Green said. "It's a four-pitch mix. He was comfortable today on the mound. He threw the ball well for them. We took some good swings off of him early and it took us a while to finally mount some decent at-bats later in the game."

Francisco Mejia homered in the second and rookie Josh Naylor connected in the third to give the Padres a 2-0 lead that Alonso erased in the sixth.

Alonso, the brother-in-law of Padres slugger Manny Machado, homered to right with Charlie Blackmon aboard after a leadoff single. It was Alonso's second tying two-run shot in two games, his 10th homer overall this season and third with the Rockies.

"I'm just happy that we got a win," Alonso said. "A very important win, a win that kind of just cuts off that slide. Just a great job by Marquez."

The Rockies added two runs in the ninth off Carl Edwards Jr., who made his Padres debut. Desmond and Tony Wolters hit consecutive RBI singles.

Naylor has played well since being recalled from Triple-A on Aug. 1, a day after outfielder Franmil Reyes was traded to Cleveland in a three-team deal.

"Seeing pitching every day, you get in a groove and you see the baseball more consistently," Naylor said. "You can read depths better, instead of coming off the bench."

Rockies: OF Yonathan Daza fouled a ball off his inner left ankle in the fourth and needed a few minutes to shake it off. He struck out and then left the game. Black said X-rays were negative. Daza was replaced by Desmond, who took over in left field while Raimel Tapia moved to center.

The Padres recalled Edwards from Triple-A El Paso and optioned right-hander Gerardo Reyes to their top farm club. Edwards was acquired from the Chicago Cubs in exchange for lefty Brad Wieck on July 31.

Rockies: RHP Peter Lambert (2-3, 6.87 ERA) is scheduled to start Monday night in the opener of a three-game home series against the Arizona Diamondbacks, who counter with RHP Merrill Kelly (7-12, 4.52 ERA).