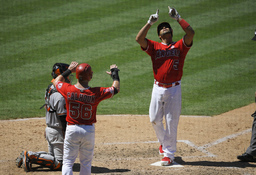 Of course, the rookie third baseman has plenty of work to do to make it a more equitable distribution with the Hall of Fame-bound Pujols, but both contributed to a vital win Sunday for the Los Angeles Angels.

Pujols hit his 650th major league homer before Thaiss launched his second of the game in the bottom of the ninth inning to give the Angels a 5-4 victory over the Baltimore Orioles.

Los Angeles avoided being swept at home in a four-game series by Baltimore for the first time.

"Whatever it takes to win," Pujols said. "Just glad we were able to come through with a big win."

Taylor Cole (1-1) threw 1 2/3 scoreless innings of relief for the Angels, helping them to avoid becoming the first team swept by the Orioles in any series since August 2018.

Trey Mancini and Jonathan Villar each drove in two runs, but the Orioles could not complete their first four-game sweep in more than two years.

Thaiss took Mychal Givens (1-5) deep to center field for a solo shot with one out in the ninth, his fourth consecutive hit resulting in a homer. Teammates swarmed Thaiss as he touched home plate for his fourth career homer and third of the series, before Kole Calhoun and Pujols doused him with water and a sports drink during a postgame interview.

It served as an exclamation point for the overhaul of Thaiss' swing that started in spring training last year. With the help of the Angels coaching staff, Thaiss was able to turn around his hitting enough to make his big league debut on July 3.

After getting three hits in his first 27 at-bats with the Angels, Thaiss went 4 for 10 in the final three games against Baltimore.

"Not too many people know what (the coaches and I) went through a couple spring trainings ago," said Thaiss, who put the Angels ahead 2-0 in the second with a two-run shot down the right field line that tucked inside the foul pole. "It was a long process. A lot of swings, a lot of blisters."

And while Thaiss is adjusting to life in the majors, Pujols keeps adding to his illustrious career.

"It's just amazing to watch what he can do at the plate, and I'm just trying to absorb as much as I can," Thaiss said.

Pujols tied the game at 4 with a two-run drive on a 3-0 count in the sixth inning, becoming the sixth major leaguer to hit 650 homers. He is the first player in baseball history with 650 homers and 650 doubles.

"I think there are 20,000-plus players that have come through this game, and to be able to be the only one to do that, it's just pretty special," said Pujols, who needs 11 home runs to pass Willie Mays (660) for fifth place on the career list. "I don't play for those numbers. I'm more glad I was able to do it when it counts to tie the game to give us a chance to win."

The combination of Pujols and Thaiss was enough to deny Baltimore a rare sweep. The Orioles' last four-game sweep came in July 2017 against Texas, and they have not taken all four games of a road series since August 2011 at Minnesota.

However, manager Brandon Hyde believes the weekend performance as a whole represents a small step forward.

"Well, we won three out of four," Hyde said. "You feel good about that. It doesn't feel good to lose the fourth like that, but you win a series on the road and it's a positive."

Angels starter Felix Pena opened up a cut on his right thumb in the second inning, one that had manager Brad Ausmus fearing he would have to turn once again to his taxed bullpen. But Pena stayed in the game after receiving treatment during a five-minute delay.

"`We can't make it through nine innings if we have to take him out of the game right now, so can you give us time to try and stem this?'" Ausmus said, recalling his conversation with umpire Jeff Nelson. "So that would have been a big problem."

Ausmus said the grip on Pena's changeup has been causing the cut to open up, and the team would examine options for either treating it in a more permanent manner or reducing his workload prior to Pena's next start.

The Angels recalled RHP Luke Bard from Triple-A Salt Lake, with RHP Jose Rodriguez optioned to Triple-A in a corresponding move. Bard replaced Pena in the sixth inning and did not allow a run in 2 1/3 innings.

Orioles: All-Star LHP John Means underwent an MRI on his left shoulder Saturday that revealed "normal wear and tear" in his rotator cuff, Hyde said. Hyde does not expect Means, who is 8-6 with a 3.12 ERA, to miss more than one scheduled start after being placed on the 10-day injured list Friday.

Angels: C Jonathan Lucroy (concussion) could rejoin the team as early as Monday, Ausmus said. Lucroy has not played since July 7, when he was injured in a home-plate collision with Houston OF Jake Marisnick.

Orioles: Baltimore had not announced a starter for Monday night at San Diego, with Hyde saying a bullpen game or an opener were the likeliest options.

Angels: RHP Jaime Barria (4-3, 6.63 ERA) will start Monday in the opener of a three-game series against Detroit. Barria is 2-0 with a 2.04 ERA at home in five appearances this season.