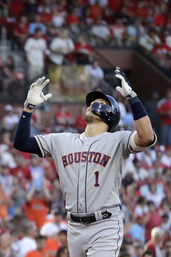 But after Correa and the Houston Astros beat Goldschmidt and the St. Louis Cardinals 8-2 on Saturday, it was another hit that attracted all the attention.

With Houston holding a seven-run lead in the eighth inning, Yairo Munoz went hard into second base on a grounder to break up a double play. Munoz slid through the bag and took out Correa, spiking the star shortstop's right elbow in the process.

"It was a brutal slide," Astros manager AJ Hinch said. "You're supposed to hold the base. He's not holding the base, there's not a mechanism to really get an automatic double play if he can't try to turn a double play. It's an unnecessary slide, he didn't need to go all the way through the base and hit Carlos. The slide rule fails again. It didn't protect Carlos there."

Hinch said the umpires told him an automatic double play was not an option since Correa made no attempt to throw to first base.

Correa, activated from the injured list Friday after recovering from a broken rib, had numbness in his fingers immediately after the collision. He finished the inning, but was lifted for pinch-hitter Aledmys Diaz in the ninth.

Goldschmidt tied a Cardinals record with Matt Carpenter and Mark McGwire for consecutive games with a home run. St. Louis had won six in a row before this loss in an interleague matchup of division leaders.

"It's an impressive feat," Cardinals manager Mike Shidlt said. "That's who he is, what he's capable of, and just goes out, takes good at bats and lets his talent work."

Goldschmidt's 24th homer was a solo drive in the fourth and accounted for the only run off Cole.

"My command was just not really there today but we did a good job of missing in good spots and mixing pitches," Cole said. "I thought they did put some good swings on balls, some of the contact worked in our favor in especially regards to keeping the pitch count down and getting a few double plays and getting some quick outs, saved a few bullets for some situations were maybe we could get a little cute kind of around the zone with runners in scoring position."

Correa's opposite-field blast drive to right off Michael Wacha blew open the game in the third and was the Astros' major league-leading 10th grand slam this season. Wacha was brought in to face Correa after starter Daniel Ponce de Leon walked the bases loaded.

Ponce de Leon (1-1) went 2 1/3 innings, his shortest career start and the third straight in which he failed to last past the fourth inning. He walked four and struck out none.

Correa added an RBI single in the first as the Astros won for the eighth time in their last 10 games. George Springer drove in two with a triple in the eighth and Yuli Gurriel extended his hitting streak to 15 games.

Correa's homer was the lone run Wacha allowed through 4 1/3 innings of relief. He struck out five and walked none.

"I felt good throughout the whole night," Wacha said. "I felt like I was throwing strikes and quality strikes down in the zone, getting ahead of guys. I just wish I could have that one pitch back."

Members of the Cardinals' 2004 team were on hand to celebrate the 15th anniversary of the franchise's 16th National League pennant. That club went 105-57 and defeated the Astros in seven games in the NLCS before being swept by the Boston Red Sox in the World Series.

The attendance was 46,518, the 13th sellout of the season at Busch Stadium.

"Everybody's got to work through something," Pressly said. "I'm in the training room getting treatment and I've got all the faith in my training staff to get me right."

Cardinals: OF Dexter Fowler is day to day and was not in the starting lineup after leaving Friday's game in the eighth inning after fouling a ball off of his left foot. INF Jedd Gyorko (back strain, right wrist) will begin a rehabilitation assignment with Triple-A Memphis on Tuesday.

Cardinals: RHP Dakota Hudson (10-4, 3.61 ERA) will make his first career appearance against the Astros. In his last start, Hudson became the first Cardinals rookie to notch 10 wins in a season by game No. 100 since Shelby Miller in 2013.