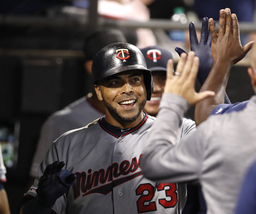 The players are enjoying the show.

Nelson Cruz went deep for the seventh time during a five-game homer streak, and the Twins became the fastest team to 200 homers in major league history during a 6-2 victory over the Chicago White Sox.

Max Kepler hit a three-run drive in the second inning for the landmark homer in Minnesota's 103rd game of the season. The previous mark was 122 games by the Texas Rangers in 2005.

"I just saw it flash across the screen," Kepler said of the record. "It's pretty cool. It's special."

"I looked at the lineup before spring training started and I was like, `This team can do damage,'" he said. "It was just a matter of if we stay healthy and have the right mindset, and we've done that so far.

"It's been pretty fun to watch."

The AL Central-leading Twins hit five homers in Thursday night's 10-3 victory over the White Sox, becoming the first team in major league history with nine five-homer games in a season.

Cruz finished with three hits and two RBIs, including a solo drive in the seventh for his 26th homer. He went deep three times in the series opener.

"Yeah, he's swinging the bat OK," Minnesota manager Rocco Baldelli said. "I don't know how much more locked in a person can get. This is major league baseball and pitchers are good and they have good stuff and they know what they're doing, too, so to watch a guy get on that kind of roll and help contribute - and sometimes even carry the team - is beautiful."

Minnesota right-hander Michael Pineda (7-5) allowed two runs and six hits in seven innings. He has a 2.87 ERA in his last eight starts.

Adam Engel homered for the slumping White Sox, who have dropped four straight and 12 of 15.

"If anybody is worried about Dylan Cease, I wouldn't be; he's going to be OK," White Sox manager Rick Renteria said. "He'll get through these little hiccups.

"Some of the things that we talk about when you're bringing up young players to the big leagues that have talent, you hope the transition is flawless, but some of them are going to get some hiccups and they're going to continue to grow and get better."

With one out in the second on Friday, Luis Arraez and Marwin Gonzalez singled and Jason Castro walked to load the bases. Byron Buxton drove in the first run with a sacrifice fly to shallow left.

Kepler followed with his 27th homer, a long drive to right on a 3-2 breaking ball. Jorge Polanco then doubled and scored on Cruz's base hit.

Engel connected for a two-run shot in the third, but Cruz's 432-foot drive to left-center off Ross Detwiler made it 6-2.

Minnesota's starters have pitched seven innings in each of the first two games of the series, providing a big boost for an overworked bullpen coming off a wild three-game series against the New York Yankees.

White Sox: OF Eloy Jimenez (right ulnar nerve contusion) went through a full workout, including batting practice - in the cage and on the field - and throwing to bases from the outfield. If he comes through the workout with no issues, he could be activated from the 10-day injured list early next week. "I'll talk to the trainers at the end of the day to see if he's felt any residual effects," Renteria said. "We'll have a better idea tomorrow."

White Sox right-hander Ivan Nova (5-9, 5.49 ERA) faces Twins left-hander Martin Perez (8-3, 4.37 ERA) on Saturday night in the third of four in the series. Nova is coming off a complete-game victory against Miami. Perez allowed five runs in four innings for a no-decision Monday against the New York Yankees.