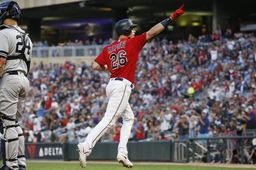 MINNEAPOLIS (AP) Most of the highlights for the Minnesota Twins in this remarkable season have been home runs, putting them on pace to smash the major league record.

That mark currently belongs to the New York Yankees, who watched the Twins whittle away at it on Monday night with a powerful start to this series between AL division leaders.

Mitch Garver hit two of five home runs by the Twins, who held on for an 8-6 victory over the Yankees after a tone-setting triple play in the first inning .

"Those are the teams that you're going to have to play at the end of the season if you want to hold up the trophy," said Garver, who has 19 homers in just 181 at-bats. "These are the games that are really good for us, because we're playing against the top level."

"Just like our lineup, it's a tough lineup to face," Sabathia said, "so you've got to be sharp, and I wasn't."

Martin Perez was hit just as hard, serving up home runs to Gio Urshela in the third , Luke Voit in the fourth and AL batting leader DJ LeMahieu in the fifth , a two-run drive that cut the deficit to 7-5.

Nine of the last 13 batters against Perez reached, with 14 total bases, and he left after failing to get an out in the fifth. LeMahieu went 3 for 4 to raise his batting average to .338, and the Yankees hit multiple homers for the 20th time in 29 games.

The deciding factor, then, was those sharp grounders, starting with Edwin Encarnacion after back-to-back walks drawn by LeMahieu and Aaron Judge. The ball went straight to third baseman Luis Arraez, who stepped on the bag and deftly whipped the ball to second baseman Jonathan Schoop in the same motion to barely get Judge. Schoop's razor-sharp relay to first baseman Miguel Sano beat Encarnacion by a step.

"You've got to give Arraez all the credit, because he just gave me a perfect throw," Schoop said.

Gary Sanchez grounded into an inning-ending double play in the third. Judge did the same in the sixth against rookie Lewis Thorpe (1-1), who earned his first major league win with 2 2/3 scoreless innings.

Taylor Rogers got his 15th save despite allowing singles to Judge and Encarnacion.

"We could have very easily got double digits tonight," Yankees manager Aaron Boone said. "They made some plays when they had to."

After the Twins lost four of their first six games on this homestand, with the bullpen blowing late leads multiple times, their longtime nemesis arrived at an inopportune time. No opponent drives fan angst like the Yanks, who always have thousands of their own cheerers in attendance to boot. But on a picture-perfect, 78-degree evening in front of 34,627 ticket buyers, the Twins improved to just 37-98 against the Yankees since 2002, including a 2-13 record in the postseason.

MORE ON THE MASHING

The Twins became only the second team to hit at least five home runs in eight games during the same season, joining the 1977 Boston Red Sox. Minnesota has 187 homers in 99 games, on pace to reach 306. The Yankees set the record with 267 home runs last year, and they're one of five teams this year on track to top that mark.

The triple play by the Twins was their first in more than two years, since Sano went around the horn to Brian Dozier and Joe Mauer against the Los Angeles Angels on June 1, 2017. Since becoming the only team in history to turn three twice in the same game, in 1990 against the Red Sox, the Twins have logged only three triple plays. This one came against Encarnacion, whose 16 homers at Target Field are the second-most by a visiting player. He has 91 RBIs in 92 career games against the Twins.

The Yankees had also gone two years without hitting into a triple play. Todd Frazier was the last guilty party, on July 25, 2017, against Cincinnati.

Yankees: LF Brett Gardner was on the bench for the second straight game because of inflammation in his left knee, and Boone said Gardner would be available in a pinch but that he'd prefer to give him more rest. ... During a three-run third inning for the Twins, Gary Sanchez forced in a run with a catcher's interference error when Cruz swung and clipped his mitt with the bases loaded. The bat hit Sanchez on the side of the hand, but he stayed in the game.

Twins: Just five days after being reinstated, 1B C.J. Cron returned to the injured list with inflammation in his right thumb, an injury that has hampered him for more than a month. CF Byron Buxton was eligible for activation, and manager Rocco Baldelli said Buxton's concussion-like symptoms had cleared, but the Twins opted for caution and more time. Thorpe came up from Triple-A Rochester instead, and RHP Cody Stashak joined him on the shuttle. RHP Zack Littell was sent down.

Yankees: RHP Domingo German (12-3, 3.38 ERA) pitches Tuesday night, potentially aiming to become the first 13-game winner in the majors - pending Stephen Strasburg's outing for Washington. German is 3-0 with a 1.50 ERA since returning from the injured list for a strained left hip flexor.