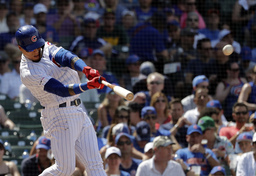 The Chicago Cubs star hit a go-ahead, three-run homer, then made a nifty play with his glove in the ninth inning Saturday to help preserve a 6-5 victory.

The game started out as a slugfest in sweltering conditions at Wrigley Field before the wind suddenly shifted in the seventh, the temperature dropped and the pitchers took command.

Cubs relievers Brandon Kintzler, Steve Cishek and Pedro Strop each pitched a scoreless inning. Closer Craig Kimbrel worked around two walks in the ninth for his sixth save - with a big assist from Baez.

With one out, Wil Myers attempted to steal second and catcher Victor Caratini's throw sailed high toward the first-base side of the bag. Baez, though, made an acrobatic catch and in the same motion dropped a no-look tag on Myers' left foot for the out.

"That was pretty crucial right there," Cubs manager Joe Maddon said. "That sets up the inning entirely differently.

"Again, those are the things that you've grown to expect out of Javy in a moment like that. He almost always rises to the occasion."

The Padres challenged and the call was upheld after review.

"Tip your cap," San Diego manager Andy Green said. "That guy's one of, if not the best, taggers in the baseball."

Anthony Rizzo had two hits and drove in two runs and Robel Garcia added an RBI triple as NL Central-leading Chicago improved to 7-1 since the All-Star break.

San Diego starter Joey Lucchesi (7-5) allowed six runs on 10 hits in 4 1/3 innings as his career-high streak of 12 straight outings of at least five innings came to an end.

"There was a lot of sweat because of the heat," Lucchesi said. "I don't want to make any excuses. I just wasn't my best today."

Chicago grabbed a 2-0 lead in the first. Rizzo drove in the first run with an RBI groundout to plate Baez and Garcia followed with a triple to drive in Kris Bryant.

Tatis led off the third with a solo shot. Machado's homer later in the inning put the Padres ahead 3-2.

After Rizzo tied it with a run-scoring single in the bottom half, Tatis had a sacrifice fly in the fourth to put the Padres back on top 4-3.

Baez hit his 24th homer in the fourth for a 6-4 lead. Renfroe homered in the fifth.

Machado led off the seventh with a drive that Bryant reached up to catch at the wall in left just as the wind started to shift.

"That was so refreshing," Maddon said, "and at the right time."

To deal with the oppressive heat and humidity, cooling stations were set up on the Wrigley Field concourse and misters were provided at the back of the bleachers. The crowd of 40,314 stood and cheered as the wind shifted and the temperature dropped.

After leading off the fifth with a double, Rizzo attempted to steal third, but was sent back after Garcia hit Austin Hedges in the helmet on a backswing as the catcher attempted to throw to third. Hedges stayed in the game.

The Padres recalled INF Luis Urias from Triple-A El Paso and optioned RHP Gerardo Reyes to El Paso before the game. The 22-year-old Urias started at second and went 1 for 4. He was hitting .315 with 19 homers at El Paso and went 2 for 24 in 11 games with San Diego earlier this season.

A pair of pitching prospects - lefty Adrian Morejon and righty Michel Baez - also joined the team Saturday and will be activated on Sunday. Both had been with Double-A Amarillo and will be used out of the bullpen.