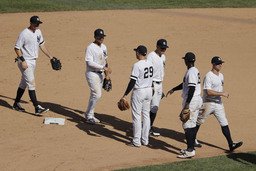 NEW YORK (AP) The Yankees were a tripleheader of hot on Saturday.

First was the temperature: 94 degrees at game time, the highest for New York this season.

Next was the offense, which torched Colorado pitching for the second straight day and romped over the Rockies 11-5 to extend the Yankees' winning streak to five.

And then came tempers: Luke Voit got hit on the chin by Chad Bettis in the fourth inning and Austin Romine was buzzed by a pair of up-and-in pitches from Jairo Diaz in the eighth.

"That was some dangerous stuff going on up by the face," Romine said.

New York went ahead when Aaron Judge doubled in a run on Anthony Senzatela's 10th pitch, Edwin Encarnacion chased the 24-year-old right-hander with a two-run double in a five-run second and the Yankees gave Masahiro Tanaka a 9-0 lead by the fourth.

Encarnacion added an RBI single in the seventh as the Yankees reached double digits in runs for the 13th time this year. He has 21 RBIs in 24 games since Yankees acquired him from Seattle.

DJ LeMahieu raised his AL-leading average to .334 with three hits, giving him five in two games against his former team.

"It's a little weird," said LeMahieu, who spent his previous seven seasons with the Rockies. "I'll be excited not to play them anymore."

New York opened a 10-game AL East lead, its largest in seven years, and increased its best-in-the-majors record to 64-33. The Yankees are 14-0-1 in their last 15 home series and are on their fifth winning streak of five games or more.

Tanaka said the heat reminded him of steamy summer games in Japan.

"It was fine when we were walking on the grass, but as soon as you got to the plate it was like a cone of heat. It was awful," Romine said. "It was a struggle out there. It was really hot - probably one of the more hot games I've ever caught."

Players in New York's dugout were steamed over the inside pitches.

"I don't think there was intent, but sometimes intent doesn't matter," Yankees manager Aaron Boone said. "Throw the ball over the plate."

"I think there's frustration for sure," said Nolan Arenado, who hit a three-run homer and left in the eighth with a cramp in his right leg. "Just long innings, so that it makes it even hotter. But as the game went on, we just got used to it."

"We are not playing the defense we are accustomed to," manager Bud Black said.

Left fielder Ramiel Tapia's failure to throw the ball to the infield quickly led to havoc in a 34-minute bottom of the second, and no one covered second as Romine, a slow-footed catcher, swiped a base for just the fourth time in his big league career.

Voit was hit in the fourth by a 91 mph pitch from Bettis that glanced off his left shoulder and struck the left side of his face, drawing blood. Voit scored on Gleyber Torres' two-run single , then returned to the clubhouse and was replaced. The Yankees said tests indicated he did not have a concussion and Boone thought Voit would be available for Sunday's series finale, when New York tries for its ninth series sweep.

Tanaka (7-5) needed just 46 pitches to breeze through five innings, getting nine groundouts and three strikeouts while allowing a pair of singles. Senzatela and Bettis combined to throw 79 pitches in the first two innings alone.

Tanaka's splitter flattened in Colorado's five-run sixth that included Arenado's 22nd homer, a drive that hit the top of the center-field wall and bounced over.

Colorado came apart in the second after Didi Gregorius' leadoff single. Torres singled to left for the first of his three hits, and Gregorius sped to third as Tapia held the ball for about four seconds and then tossed ever-so-softly toward third. Senzatela cut off the throw and flung the ball into right field as Torres headed to second, allowing Gregorius to head home.

Romine singled for a 3-0 lead and made a delayed steal of second with the infield shifted for LeMahieu. Romine scored on a bases-loaded single by Aaron Hicks , who had been 4 for 45 in his career with the bases full.

"I noticed no one was covering when I got halfway there," Romine said. "I was happy about that."

Rockies C Tony Wolters was limping after the 6-foot-7, 282-pound Judge slid into him trying to score on Encarnacion's first-inning grounder to shortstop Trevor Story. Wolters held onto the ball and tagged out Judge.

Boone watched Friday's game from owner Hal Steinbrenner's box, between the second and third decks, between home plate and third base. Boone was serving a one-game suspension for his tirade at an umpire Thursday.

RHP Deivi Garcia made his second start for Triple-A Scranton/Wilkes-Barre and allowed one run and three hits in four innings with four walks and four strikeouts. The 20-year-old right-hander has 124 strikeouts in 77 2/3 innings at three minor league levels this year.

Rockies: OF David Dahl was 0 for 3 with a walk, a day after he was scratched due to a bruised left foot.

LHP James Paxton (5-4) starts Sunday for the Yankees. RHP German Marquez (8-5), who starts for the Rockies, has the highest ERA among qualified NL pitchers at 5.12.