Giants win 7th straight thanks to botched play by Mets 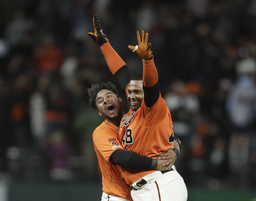 SAN FRANCISCO (AP) The way the pitchers on both teams were dealing, it figured that it might take a miscue in the field for either team to score.

A botched fly ball between New York Mets left fielder Dominic Smith and shortstop Amed Rosario did the trick for the San Francisco Giants for a second straight season.

Alex Dickerson raced home from first after Smith failed to catch a two-out popup in the 10th inning that he tentatively played to avoid a collision with Rosario and the Giants won their season-high seventh straight game, 1-0 on Friday night.

"We got a break," manager Bruce Bochy said. "You take it. You saw some great pitching tonight, that's what the story of that game was. Just terrific pitching on both sides. ... You take it any way you can and we got a break there, which we needed."

The misplay in the field ended a night dominated by starting pitchers Jacob deGrom of New York and Tyler Beede of San Francisco, and was eerily reminiscent of a game last August between these same two teams in New York. In the 13th inning of that game, Smith collided with Rosario on a shallow fly ball by Brandon Crawford, allowing Andrew McCutchen to score the winning run in a 2-1 game.

That play was on Smith's mind when Pablo Sandoval hit a fly ball off Jacob Rhame (0-1) that looked like it would be a routine out to end the inning. Smith didn't aggressively approach the ball this time to avoid Rosario and the ball fell safely.

"I had a good read on it and at the last second got a little scared because last year we collided," Smith said. "I just took my eye off the ball because what had happened and ended up dropping it."

Dickerson never stopped running and scored when cutoff man Todd Frazier's throw home was off target, sending the Giants pouring out of the dugout in celebration.

"I was just going as hard as I could," Dickerson said. "Once it dropped, I was going to do everything I could to get home."

The victory lifted the Giants' record to 49-49, the first time they have been at .500 since the start of the season.

Both starting pitchers were sharp, with Beede retiring 11 straight batters following a leadoff single by Jeff McNeil and allowing only one runner to get into scoring position. He was extremely efficient, needing just 89 pitches to get through a career-high eight innings. He allowed just three hits and one walk with five strikeouts.

Reigning NL Cy Young winner deGrom was far more overpowering with 10 strikeouts in seven innings, inducing 25 swings and misses. The Giants had only three hits and were unable to convert after putting runners in scoring position in the final three innings against deGrom.

The Mets lost the first two games of this series despite two sparkling starts from deGrom and Noah Syndergaard, who combined to allow one run in 14 innings.

"Two fantastic outings by our starters going seven. You have to win those," manager Mickey Callaway said. "All losses are hard to swallow."

Mets: Zack Wheeler (right shoulder) threw 13 pitches off the mound and played catch before the game. If he comes out of that feeling well he could be ready for a bullpen session. ... RHP Tyler Bashlor and RHP Stephen Nogosek were recalled from Triple-A Syracuse to add fresh arms to the bullpen. RHP Chris Mazza and INF Luis Guillorme were optioned to Syracuse.

Giants: LHP Ty Blach was called up from Triple-A Sacramento to take the place of LHP Williams Jerez, who was optioned after getting the win Thursday night.

With five strikeouts in the first three innings, deGrom moved past Ron Darling for sixth in Mets history with 1,149. He added five more and is 18 behind David Cone for fifth.

Jeff Samardzija (7-7) looks to win his fourth straight start when he takes the mound for the Giants against rookie Walker Lockett (0-1) and the Mets.