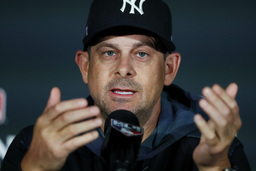 NEW YORK (AP) The Savages of The Stadium. That's what the New York Yankees are in the mind of manager of Aaron Boone.

Boone got fired up at rookie umpire Brennan Miller in a profane second-inning rant , and New York awoke from a sleepy start to rally past the Tampa Bay Rays 6-2 in a doubleheader opener Thursday that reopened a seven-game AL East lead.

After Domingo German gave up homers to his first two batters, Gio Urshela hit a tying home run in the second off Yonny Chirinos. And then Boone indelibly imprinted his temper on the Yankees season.

Brett Gardner took a 1-2 splitter on or off the inside of the plate for strike three, returned to the dugout, slammed his bat into the helmet cubbyholes nine times and then eight times into the dugout roof. Microphones caught Boone yelling that the pitch was outside to Miller, a Triple-A International League crew chief who made his big league debut April 20 as a call-up umpire.

Miller said, "I heard you, Aaron," and when Boone persisted, the umpire ejected him. Boone ran out and kept up the argument, getting close to Miller's face and clapping his hands for emphasis in a profanity filled performance that would have made Billy Martin proud.

Chirinos had thrown a 1-1 pitch to Aaron Judge in the first that appeared to be low before dropping a splitter into the strike zone for strike three.

"Just a big game, and just felt like some things weren't going our way there early, and it felt like it needed to be known," Boone said. "Sometimes in the heat of the battle, you just kind of utter some things. But I feel that way about our guys, no doubt."

Boone was tossed for the third time this season and the seventh time in two years as a big league manager. Gardner applauded after Boone's tantrum.

"Certainly didn't want anyone else getting tossed. We were pretty heated there, several of our guys there in the first couple of innings," Boone said. "So I just felt it was necessary in that spot to kind of take the attention off some of the other guys."

After Wednesday night's rainout was rescheduled as part of the doubleheader, the start was delayed 1 hour, 26 minutes because more rain was forecast. Austin Meadows homered on German's fourth pitch and Diaz on his eighth , both curveballs.

"I loved it," German said through a translator. "Personally, I fed off that energy. It gave me a boost to concentrate and go out there, do my job and try to get this victory for him, because he went out there and fought for us. I felt that it was my responsibility to go back out there and return the favor."

Gary Sanchez smashed a go-ahead 110 mph single off the glove of third baseman Yandy Diaz during a three-run fifth. Diaz had helped the Yankees come alive when he dropped Didi Gregorius' leadoff popup in the second for a two-base error.

"Just with the breeze, it kind of was moving one way or the other," Diaz said through a translator.

Luke Voit singled in a run in the fifth and Urshela had an RBI double as part of a three-hit game that raised his average to .308. Aaron Hicks added a sixth-inning homer.

Chirinos (9-5) gave up five runs - four earned - and nine hits in five innings, including the 17th homer he allowed this season.

Charlie Morton (11-2) was to start the second game for the Rays and Chad Green (2-3) for the Yankees.

Gregorius, adding to his Twitter emojis after Yankees win, debuted his Instagram portraits of Yankees teammates this week with Edwin Encarnacion with a parrot on his right arm, a reference to Encarnacion's parrot wing motion during home run trots.

David Cone threw out a ceremonial first pitch before the second game on the 20th anniversary of his perfect game against Montreal.

Former Yankees manager Buck Showalter, let go by Baltimore at the end of last season, is working this week as a studio analyst for the Yankees' YES Network.

Kevin Kiermaier hit cleanup for the first time in his big league career and went 1 for 4 with a double.

Rays: Tampa Bay had not announced a starter for Friday's game at Baltimore.

Yankees: Pushed back because of the rainout, LHP J.A. Happ (7-5) is slated to start Friday against Colorado and LHP Kyle Freeland (2-6).