Bumgarner shines, Giants top Mets in 16 for 6th in a row 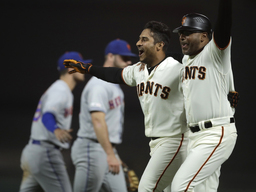 SAN FRANCISCO (AP) You bet Madison Bumgarner pleaded to Bruce Bochy to start the 10th inning. And of course the big left-hander remained a little irked afterward considering he didn't get the chance.

If this happened to be Bumgarner's final start for San Francisco, he left another lasting memory - even if everybody wound up groggy by the time this game finally ended in 4 hours, 47 minutes.

Bumgarner pitched nine superb innings but had nothing to show for it aside from an ovation of sheer appreciation, and the San Francisco Giants rallied past the New York Mets on Donovan Solano's 16th-inning RBI single for a 3-2 win Thursday night.

"He lobbied, trust me, he did, in fact I came in after the game he's still mad at me for not letting him go out there in the 10th," Bochy said. "He did his job."

The Giants finished their season-best sixth straight victory hours after Bumgarner wrapped up his longest start since a nine-inning shutout against Arizona on July 10, 2016. He threw just 94 pitches.

The Mets went ahead on rookie Pete Alonso's 32nd home run leading off the 16th before San Francisco made it 2-2 on Brandon Crawford's double in the bottom half. Solano delivered against Chris Mazza (0-1) for his second career walkoff hit and RBI - the other also came against the Mets for the Marlins on Oct. 2, 2012.

The Mets followed a season-best 14 runs and 17 hits in Wednesday's 14-4 road victory against the Twins by having their four-game winning streak snapped.

Bumgarner and Noah Syndergaard dueled to no-decisions, neither willing to give this one away.

The Giants relievers did their part, too, as Bumgarner paced around the clubhouse for all those extra innings.

Tony Watson worked a 1-2-3 12th after Reyes Moronta's perfect 11th. Will Smith escaped a bases-loaded jam in the 10th with a strikeout of Jeff McNeil.

Bumgarner allowed five hits and walked one in what could be the countdown on his decorated tenure for the Giants if they decide to trade him before this month's deadline.

"I'm here to win games for this team, and that's what we're doing," he said.

The lefty ace allowed McNeil's leadoff single in the ninth then was initially credited with getting J.D. Davis to ground into a double play, but the Mets challenged the call and it was overturned on replay after 48 seconds.

MadBum still got out of it and received a rousing ovation as he walked off the mound.

"It means a lot. I've been through a lot here and I've been here for a long time," Bumgarner said. "That's special, it is."

Alonso's groundout in the first put the Mets ahead. San Francisco tied it on Kevin Pillar's sacrifice fly in the fourth. Both teams had other chances, but each starter consistently worked out of jams.

Syndergaard and Bumgarner had previously matched up June 4 at Citi Field with neither earning a decision but also in the 2016 NL wild card game during which Bumgarner tossed a four-hitter in the 3-0 win and Syndergaard pitched seven shutout innings.

Bumgarner, the 2014 World Series MVP, owns a 7-0 record with a 1.63 ERA lifetime against the Mets including that wild-card gem.

Bumgarner's 21st start of the season matched his total from an injury-shortened 2018 season after he only made 17 starts in 2017 when he also was hurt.

"The guy's a competitor, he knows how to pitch. He knows what our hitters are trying to do and he knows how to get them out," Mets manager Mickey Callaway said. "He threw a hell of a game."

Syndergaard, who has won his last four decisions, allowed one run on six hits over seven innings, struck out eight and walked one.

The Giants returned home from a four-game sweep at Colorado and won for the ninth time in 10 games and 13th in 15.

Buster Posey recorded his first career four-strikeout game, going 1 for 7 with a single in the 15th.

Close to two dozen pigeons gathered in left field during the first inning unfazed by any balls off the bat. Members of the grounds crew believe the birds - who flew away after about 10 minutes - overate some fresh, high-quality grass seed.

Mets: RHP Zack Wheeler, sidelined by shoulder fatigue, was scheduled to play catch for a second straight day. "Playing catch and continuing to play catch will dictate a lot what goes on next, so we'll just kind of feel him out day to day and see where we're at," Callaway said. He named RHP Walker Lockett his Saturday starter in Wheeler's place.

Giants: Bochy checked with Pablo Sandoval and was prepared to give him a break but the third baseman reported he was fine to play after seven straight games. Sandoval received the Heart & Hustle award in a pregame ceremony on the field.

RHP Jacob deGrom (5-7, 3.21 ERA) pitches Friday night for New York opposite Giants RHP Tyler Beede (3-3, 5.44) in his 14th career appearance and with San Francisco having gone 7-2 in his outings and winning five of his last six. Beede pinch hit in the 14th Thursday.