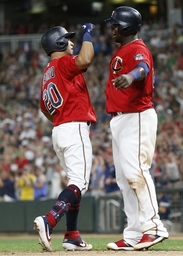 MINNEAPOLIS (AP) After their dominant start to the season, the Minnesota Twins were starting to sag a bit.

With one powerful swing Thursday through that thick midsummer night air, Eddie Rosario provided quite the jolt.

The pinch-hitting Rosario produced a go-ahead, three-run homer on the first pitch from reliever Yusmeiro Petit in the seventh inning, and the Twins beat Oakland 6-3 to stop a five-game winning streak by the Athletics.

"He does love being in these situations," Twins manager Rocco Baldelli said. "I think he fully expected to hit a home run."

Rosario gave the Twins their first pinch-hit homer of the year and the third of his career. Mitch Garver and C.J. Cron each went deep in the eighth to pad the lead, and Taylor Rogers pitched two scoreless innings for his 14th save in 17 tries to ensure the end of a season-high three-game losing streak by the Twins.

"I saw everybody kind of put their heads down in the dugout. That moment lifted everybody up, and that's what I was trying to do," said Rosario, who screamed at his exuberant teammates as he ran along the first base line. "Keep everybody together and pump everyone up."

The A's, who have surged into the wild card race with 12 wins in their last 15 games, used an RBI double by Khris Davis in the fourth inning and Jurickson Profar's two-run home run in sixth off Kyle Gibson to take a 3-1 lead.

The Twins trailed entering the seventh against A's starter Mike Fiers, who was 7-0 with a 2.09 ERA over his previous 12 turns starting with his no-hitter on May 7. Luis Arraez, the rookie second baseman who has provided an unexpected midseason spark, doubled with one out before Miguel Sano drew a walk.

Fiers was pulled for Petit (2-2), the most-used pitcher in the major leagues with 49 appearances, and Rosario crushed the right-hander's 90 mph fastball off the videoboard facade beneath the second deck in right-center while admiring the trajectory before his trot around the bases. Petit said he tried to aim down and away, but the ball caught a little too much of the middle of the plate.

That was Rosario's 21st home run, his first since June 23 due to a stint on the injured list for a sprained left ankle, and he obliged the Target Field crowd of 28,432 with a curtain call.

"Just about everybody was on the top step," said Gibson (9-4), who finished seven innings for the victory. "You can feel those moments, and that was going to be the inning we were going to do it. It was pretty exciting to see it off the bat."

With Cleveland on a five-game winning streak to whittle the AL Central lead to four games, the smallest since May 19, the Twins badly needed this jolt from Rosario, who was held out of the original lineup along with All-Star shortstop Jorge Polanco for pre-planned rest. Center fielder Byron Buxton has also been notably absent this week because of concussion-like symptoms, and the atmosphere around the ballpark felt a little off until Rosario's big swing.

"The energy everywhere in the building changed after that," Baldelli said.

Fiers threw only 89 pitches, but the heat factored into manager Bob Melvin's decision to remove him. Fiers also had the misfortune of glancing at the scoreboard and seeing Gibson's pitch count of 106, mistakenly believing it was his.

"Mentally, it crushed me," Fiers said.

With the first-pitch temperature at 87 degrees on an extra-muggy night, home plate umpire Quinn Wolcott was hit with a double whammy when Cron's foul ball banged off his mask. He was removed from the game, with Bruce Dreckman moving from second base to fill in after a delay of about 10 minutes. After the unexpected break, Fiers finished the inning with one pitch by completing his strikeout of Cron.

For the second time this week, the Twins dropped a reliever from the roster, this time designating right-hander for assignment Matt Magill, who gave up six unearned runs in one inning Wednesday. Right-hander Kohl Stewart was recalled from Triple-A to take his place, creating a fourth opening on the 40-man roster for potential trades in the next two weeks before the deadline.

Athletics: All-Star 3B Matt Chapman was on the bench with a sore left ankle, after being removed from the previous game after two innings.

Twins: Buxton participated in pregame baseball activities on the field and, according to Baldelli, was "energy-wise doing very well." He's eligible to return on Monday, but Baldelli declined to speculate about whether he would be immediately reinstated.