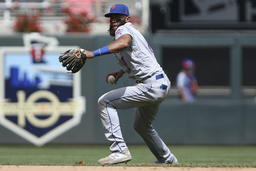 Alonso and the New York Mets put quite the hurt on the Minnesota Twins to sweep this two-game series.

Dominic Smith put the Mets in front with his pinch-hit, three-run homer in the seventh inning, and the rookie All-Star Alonso added a 474-foot moonshot halfway up the third deck in a 14-4 victory on Wednesday that stuck the Twins with their first three-game losing streak this season.

"That one felt good. Hopefully I can hit some farther than that," said Alonso, who watched his homer the whole way. "It's not every day you hit one like that."

Amed Rosario went 4 for 4 with a home run and three RBIs for the Mets, who set a 2019 high for runs and matched a season best with their fourth consecutive victory. All of the wins have been on the road for the Mets, who at 21-32 still have the worst record away from home in the NL.

Though the Mets already had blown open the game against Twins relievers Trevor May (3-3) and Matt Magill by that point, the two-run drive by Alonso was ultimately their most remarkable of the humid afternoon, longer than any of the 57 homers he hit in the derby in Cleveland last week. That also was the first post-derby long ball by Alonso, who emerged from the break in a 1-for-17 slide until his 31st homer.

"I still don't think it's the farthest one he'll hit, but for him to hit one like that it just shows how much power he has and the kind of player he is," Smith said. "It's fun."

Alonso also now has the Mets record of 54 extra-base hits in a rookie season, with 67 games still to go.

"Sky's the limit right now," he said. "I'm just looking to keep working hard and playing hard for the guys."

The Twins took a five-game lead on Cleveland into the afternoon, their smallest advantage in the AL Central standings since May 19, and they produced some untimely sloppiness. Left fielder Eddie Rosario dropped a routine fly at the warning track for a two-base, two-out, two-run error in the six-run eighth, giving the Twins six errors and 11 unearned runs in five games since the All-Star break. Rosario said afterward he lost track in the sun as the ball approached his glove.

Seven of the runs scored by the Mets were unearned, including one of the two against Twins starter Martin Perez due to an off-target throw by third baseman Miguel Sano in the fourth inning that allowed Alonso to reach on a routine grounder. Nelson Cruz and Mitch Garver, who gave the Twins a 3-2 lead with his 15th homer in the fifth, went deep against Mets starter Jason Vargas (4-5), who finished six innings for the victory.

"We were in a good spot, and then the wheels kind of fell off in a few different ways," manager Rocco Baldelli said.

May surrendered the homer on a 0-2 curveball to Smith, who was 0 for 16 with 11 strikeouts this season with an 0-2 count until that swing. May also gave up the go-ahead home run in the seventh inning on Sunday in a 4-3 loss to the Indians.

"It's a gut punch when you feel so good, you're getting ahead of guys and you're making the pitches over and over and over to guys," May said. "Sometimes they just earn it. Usually they don't earn it this many times in a row, though."

This game got so out of hand for the Twins that utility infielder Ehire Adrianza pitched the ninth, as the Mets improved to 5-0 at Target Field, where they also won three games in 2013.

"We're inching closer and closer. It's not out of the realm of possibility, and that's what we're focusing our sights on, getting to the postseason this year," manager Mickey Callaway said.

The fan in the lower left field seats who caught Cruz's homer was wearing a Mets cap. When the TV camera captured him later , he was wearing a Twins cap.

Mets: After being designated for assignment last week, RHP Wilmer Font was traded to Toronto for cash. Font was acquired in May in a deal with Tampa Bay.

Twins: 2B Jonathan Schoop was diagnosed with a mild abdominal muscle strain, after hurting himself during a swing in the eighth inning on Tuesday night. He was held out of the lineup.

Mets: RHP Noah Syndergaard (7-4, 4.55 ERA) pitches on Thursday night in San Francisco to start a four-game series against the Giants, who send LHP Madison Bumgarner (5-7, 3.86 ERA) to the mound.