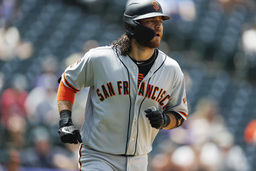 DENVER (AP) With nearly every swing, Brandon Crawford's day at the plate got better and better.

Crawford went 5 for 6 with two homers and tied a San Francisco team record with eight RBIs, and the Giants scored a season high in runs in a 19-2 rout of the Colorado Rockies on Monday in the first game of a split doubleheader.

"I never expect a five-hit game to come along, but yeah I have been feeling a lot better at the plate," Crawford said. "There were a couple of at-bats in Milwaukee where I was having good at-bats, kind of battling and getting deep into counts. Even drawing walks kind of helps your confidence going forward. I've been feeling good, seeing the ball well. You expect to get hits when that happens."

The rest of the Giants followed his lead.

Mike Yastrzemski went 4 for 6 with a homer and Buster Posey also went deep for San Francisco, which earned a rare victory at Coors Field in the makeup for a May 8 rainout. Crawford has eight home runs on the season.

It was just the fifth win in the Giants' past 25 games at the Rockies' ballpark, though San Francisco has been hot recently winning nine of its past 11.

For the Rockies, it was the most runs they have ever allowed to the Giants, an NL West rival. It marked only the fourth time in the Rockies' history that they had lost by at least 17 runs, and the first since losing by 17 to Florida on Sept. 17, 1995.

Preserving his bullpen in the one-sided slugfest, Rockies manager Bud Black inserted first baseman Mark Reynolds to pitch the ninth. Reynolds allowed two runs and two hits. It was the third time in Rockies history that a position player had been used as a pitcher.

"You have to preserve their innings when you need to," said Black, also alluding to the number of runs being scored at Coors Field lately as well as overall in the major leagues.

"I think it's been a little wacky for the last month, really," Black said. "This is what's happening in 2019. We've really got to cinch our belts a little tighter as pitchers and work our way through this. And we've got to get the ball down more consistently, now more than ever before, because of what's happening with home run totals and what's happening on offense across the big leagues."

Jeff Samardzija (7-7), who had allowed 17 runs in 12 1/3 innings in losing his three previous starts at Colorado, didn't give up a run until pinch-hitter Raimel Tapia homered to straightaway center with two outs in the sixth inning.

It was Tapia's fourth-career pinch homer and the third this season. Ryan McMahon homered in the seventh for the Rockies' other run.

Samardzija retired the first six batters he faced and finished with nine strikeouts in 6 2/3 innings. He allowed two runs and four hits.

German Marquez, who won both of his previous starts against the Giants in San Francisco this season, was in trouble from the outset.

Five of the first six batters he faced connected for hits capped by back-to-back home runs by Crawford and Yastrzemski in San Francisco's five-run first inning.

The Giants put together a seven-run third that included a two-run homer by Posey off Jesus Tinoco.

Crawford added an RBI single in the fourth, a two-run drive off Tinoco in the sixth and a two-run single in the ninth off Reynolds. Others in the San Francisco era with eight RBIs in a game are Willie Mays on April 30, 1961, and Orlando Cepeda on July 4, 1961.

First baseman Mark Reynolds made his second career pitching appearance when he pitched the ninth inning. He also pitched last July 8 against Miami while with Washington. Reynolds threw 21 pitches, 10 for strikes and allowed two hits and two runs. He walked one and hit Posey in the back with a pitch when he tried to throw a curveball.

Posey glared at Reynolds as he walked to first and Reynolds said after the game that Posey texted him to make sure he knew that he was just joking with him. Reynolds also said he didn't try another curveball and save for a changeup, stuck with fastballs the rest of the way.

The Giants had RHP Sam Coonrod as their 26th man for Monday's split doubleheader while the Rockies appointed RHP Yency Almonte. Both appeared in the first game. Coonrod threw a scoreless ninth and Almonte allowed a run and two hits in 2 2/3 innings.

Giants: RHP Dereck Rodriguez (3-5, 5.27 ERA) was scheduled to be recalled from Triple-A Sacramento to start Game 2 of the doubleheader.

Rockies: RHP Chi Chi Gonzalez (0-1, 6.00 ERA) is expected to be recalled from Triple-A Albuquerque to start the second game.