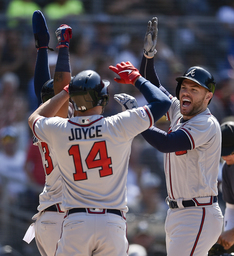 Soroka struck out a career-high nine to win his 10th straight decision and Freeman hit a three-run homer to break a scoreless tie in the eighth inning as the Braves beat the San Diego Padres 4-1 Sunday for a three-game sweep.

The NL East-leading Braves have won seven of eight.

Asked about Soroka being in the thick of the NL Cy Young Award race, Freeman said: "Who cares about the Rookie of the Year. I think he's running it for Cy Young. 10-1 with a 2 (2.24 ERA), what else would you have to do? He's pretty special. For him to be only 21 and doing that, that's what makes it even more special to me."

Soroka got Sunday's decision thanks to Freeman's shot deep to right field off Trey Wingenter (1-2) with two outs in the eighth. Matt Joyce pinch-hit for Soroka with one out in the inning and singled to right. Ronald Acuna Jr. followed with a single to right. Dansby Swanson struck out before Freeman, who had been 0 for 11 in the series, hit his 24th homer. Josh Donaldson walked, stole second and scored on Nick Markakis' single to center.

Soroka allowed six hits in seven scoreless innings and walked one. His previous strikeout high was eight in a 3-1 home win against San Diego on April 29. The 21-year-old made five starts in 2018.

"He's well beyond his years," McCann said. "He's composed, nothing really rattles him and he knows exactly what he's trying to do. He can manipulate the baseball with the best of them. ... His stuff is off the charts, his makeup and the way he works in here. He's going to be really good for a really, really long time."

Soroka breezed through 83 pitches on a 73-degree day.

"You get an opportunity to feel good on a really beautiful day," he said. "Not too many day games that we get a chance to play this late in the year are going to be this nice. If you're in Atlanta, it's going to be 90-plus and it's going to be a grind. So it felt really good to get out there, get some new legs out of the break and execute."

Soroka was hit on the right hand by a pitch by Quantrill in the third, but stayed in the game.

"The fact that he's a good buddy of mine, it doesn't make it any more important for us to win that game, but I'm glad to see that he's doing so well," Quantrill said. "Unfortunately he did kind of what he's been doing against us."

Atlanta's bullpen faltered a bit in the eighth, when the Padres got a run on Josh Naylor's two-out, bases-loaded single to center. Chad Sobotka, the third pitcher that inning, came on and struck out pinch-hitter Hunter Renfroe on a full-count pitch to end the threat.

A.J. Minter pitched the ninth for his fifth save.

Acuna, the 2018 NL Rookie of the Year, made a brilliant leaping catch to rob Manny Machado of a two-run home run to end the fifth. Acuna hit the fence in center field as he made the catch and then tumbled to the warning track with the ball in his glove and his cap flying off his head. Soroka looked toward Acuna, pumped his right fist and tipped his cap.

The showdown between Soroka (Calgary) and Quantrill (Port Hope) was the first between Canadian-born starters since Boston's Ryan Dempster faced Minnesota's Scott Diamond on May 18, 2013.

Quantrill held the Braves to three hits in six scoreless innings, struck out three and walked one.

"They're a good club," Padres manager Andy Green said. "It's obviously frustrating for us. Anytime you get swept it's a frustrating series. I think these last two games in particular that we had every opportunity to win those baseball games."

Padres rookie Fernando Tatis Jr. was caught off first base in the first inning by Soroka but he made a remarkable twisting slide to get back safely into the bag.

"He's the first guy I've ever seen get a standing ovation for getting picked off," Green said.

"We grew up over there in DR (Dominican Republic) playing games like that, so that's where it comes from," Tatis said.

Freeman, who grew up in Orange County up the freeway, had a big cheering section.

"I had every aunt and uncle, every single person, cousin, niece, nephew, every grandparent, so I had them all here," he said. "So I finally got one hit for them."

During a video review of Acuna's stolen base in the sixth, all three Padres outfielders plus third baseman Machado and Tatis Jr. chatted with the 2018 NL Rookie of the Year. They had 1 minute, 43 seconds to visit as the call was upheld.