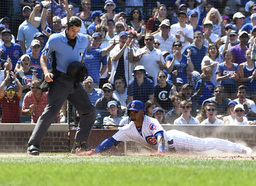 CHICAGO (AP) After struggling prior to the All-Star break, the Chicago Cubs have started the second half clicking on all cylinders.

The NL Central leaders posted their first series win since taking all three from St. Louis on June 7-9.

The Cubs were 10-16 in the 26 games before last week's break. They outscored Pirates 22-10 in the series and manager Joe Maddon credited the rest during the break as the major factor behind the turnaround.

Robel Garcia had a pair of doubles and Anthony Rizzo added two hits as Chicago improved to 32-16 at Wrigley Field.

Quintana has allowed six runs in 19 innings for a 2.84 ERA during the winning streak. Before that, he had lost six straight decisions.

Bryan Reynolds got two hits and drove in a run for Pittsburgh, which has dropped five of seven.

Chicago took a 1-0 lead in the second on an RBI double by Garcia, before Pittsburgh rallied for three in the third to make it 3-1. Reynolds drove in the first run with a single, Starling Marte followed with a sacrifice fly and Jung Ho Kang capped the rally with an RBI double.

The Cubs pulled within 3-2 in the fourth on a two-out RBI single by Quintana after David Bote had been intentionally walked. Quintana was 1 for 34 for the season before his hit off Trevor Williams (3-3).

"Finally," Quintana said. "To get the base hit was exciting."

Victor Caratini had a tying sacrifice fly in the fifth and Heyward hit a two-run homer for a 5-3 lead.

Almora had a pinch-hit homer in the sixth and Schwarber followed with a drive to right on the next pitch. Williams was pulled after giving up a single to the next batter, Javier Baez, and Rizzo later had a sacrifice fly.

"Fastball execution probably wasn't his friend," Pittsburgh manager Clint Hurdle said. "I don't make excuses for people. It's 13 days away (from his last appearance), and that can be problematic. In his case, a guy that is a touch-and-feel guy and pitches with command and pitches off the fastball, it affected him."

"Right now, his confidence is soaring," Maddon said. "He's feeling so good about himself. He's on the barrel more often. You don't see the ball off the weaker part of his bat nearly as much as we have in the past."

Pirates: RHP Keone Kela (right shoulder inflammation) began a rehab assignment with Triple-A Indianapolis on Saturday, striking out two in a scoreless inning. ... OF Gregory Polanco (left shoulder inflammation) went 2 for 4 with a pair of doubles and four RBIs for Indianapolis Saturday. ... INF Erik Gonzalez (left clavicle fracture) had his rehab stint suspended because of a left hamstring strain.

Cubs: RHP Kyle Hendricks (7-7, 3.49 ERA) starts the opener of a three-game series against Cincinnati on Monday night as the homestand continues. RHP Luis Castillo (8-3, 2.29) pitches for the Reds.