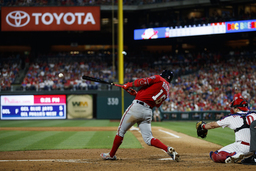 PHILADELPHIA (AP) Juan Soto walked up to the plate expecting to see a splitter and he hammered the first one he saw.

Soto hit a go-ahead two-run homer off closer Hector Neris with two outs in the ninth and the Washington Nationals rallied for a 4-3 win over the Philadelphia Phillies on Saturday night.

"I was looking for it and he hung it," Soto said. "It felt amazing."

Soto crushed a three-run homer in the 10th inning in Philadelphia on April 9 to lead the Nationals to a 10-6 win.

"I can't say enough about him, being 20," Nationals manager Dave Martinez said. "He doesn't shy away from big moments. He's a good hitter. He has a plan when he's in the batter's box."

Neris (1-4) retired the first two batters before Anthony Rendon hit a single. Soto blasted the next pitch out to left-center for his 16th homer, capping a comeback from a 3-0 deficit against Aaron Nola.

Wander Suero (2-4) got two outs to earn the win and Sean Doolittle finished for his 20th save in 24 tries.

"It's a tough stretch," Phillies manager Gabe Kapler said. "We understand this isn't the level of baseball we can play to reach the postseason and go deep, but we're resilient."

Nola gave up five hits and one run, striking out nine in six innings in his fifth straight stellar outing. He has a 0.76 ERA in that span. But Neris blew his third save of the season to cost Nola his ninth win.

"Corbin kept us in the game and our offense keeps plugging away," Martinez said.

The Phillies jumped ahead 2-0 in the second. Rhys Hoskins led off with a bloop double off first baseman Ryan Zimmerman's glove and scored when Cesar Hernandez lined an RBI double down the left-field line. After Hernandez was caught stealing third, Maikel Franco launched his 14th homer into the left-field seats.

Franco's sacrifice fly in the fourth increased the lead to 3-0.

After Nola walked two hitters in the sixth, Victor Robles drove in a run on a bloop single.

The Nationals cut it to 3-2 in the eighth off Adam Morgan when Soto scored from third after Franco booted Robles' grounder for an error. Franco made a couple excellent plays before his miscue.

Phillies center fielder Roman Quinn received a standing ovation after making a leaping, diving catch on the warning track to rob Adam Eaton of extra bases in the fifth.

Bryce Harper made a no-hop throw from the warning track in right-center field to third base to prevent Robles from stretching a double into a triple in the second inning.

Nationals: RHP Max Scherzer was placed on the 10-day injury list retroactive to July 10 with a mid-back strain and C Spencer Kieboom was recalled from Double-A Harrisburg. Scherzer was originally supposed to start Sunday before his outing was pushed back to Tuesday. He landed on the injury list after throwing a bullpen session before the game.

Phillies: INF Sean Rodriguez was placed on the 10-day injury list with a right abdominal strain and OF Adam Haseley was recalled from Triple-A Lehigh Valley.