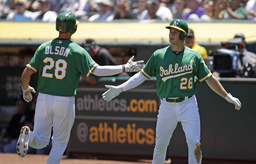 OAKLAND, Calif. (AP) Franklin Barreto picked on a familiar opponent, and that was plenty for the Oakland Athletics.

Barreto hit a three-run homer to cap a seven-run first inning and the A's routed the Chicago White Sox 13-2 on Saturday.

Five of Barreto's nine career home runs have come against the White Sox. He extended the Athletics' season-high streak to 14 games with at least one home run.

"That's how our lineup is," said Matt Olson, who had two hits and scored three times. "Anybody can do damage any day. We're not relying on one guy every day to come in and produce."

Barreto spent the past two years bouncing back and forth to the minors and was already sent down once this year before the A's called him up June 30 to replace Jurickson Profar as their everyday second baseman.

Barreto's second stint with the big league club got off to a shaky start and he was batting .087 (2 for 23) until his home run off White Sox reliever Ross Detwiler.

"I was looking for a pitch that I could make good contact on," Barreto said through a translator. "He gave me a curveball and I put a good swing on it."

Matt Chapman had three hits and scored twice for the A's, who have won nine of 11. Marcus Semien added two hits and Robbie Grossman drove in three runs.

Oakland scored four more in the fourth and made it 12-0 in the sixth when Ramon Laureano was hit by a pitch with the bases loaded.

Covey couldn't overcome command issues after being activated off the injured list before the game. The right-hander allowed six runs, walked two and gave up four hits in his first start since June 5 because of shoulder inflammation.

"These are probably tough of the toughest games or the worst games that I can remember for us," White Sox manager Rick Renteria said. "That's a good club and they're showing they're a good club. We've got to be able to hold our own with them and today we didn't."

Blake Treinen allowed two runs in the White Sox seventh and has a 6.11 ERA over his last 18 games. Treinen leads the A's with 16 saves this season but was replaced as the closer by Liam Hendriks after going on the injured list with a strained right shoulder in late June.

The A's have had two or more extra-base hits in 26 consecutive games, the second-longest streak in Oakland history.

AT LEAST HE STARTED WELL

White Sox catcher Zack Collins struck out in his first two plate appearances and was in an 0-for-23 funk since homering in his first major league at-bat against Texas on June 21 before hitting a one-out single in the seventh.

Chicago right-hander Juan Minaya was designated for assignment to make room for Covey. The 28-year-old reliever had a 3.90 ERA in 22 games this season.

White Sox: SS Leury Garcia came out of the game in the sixth after twisting his ankle while striking out in the fifth. Renteria expects Garcia to play Sunday.

Athletics: OF Stephen Piscotty's sprained right knee has healed enough to allow him to run the bases on Sunday. Piscotty could be activated off the injured list next week if all goes well. ... C Nick Hundley (back spasms) has started a rehab assignment in the Arizona League.

Oakland LHP Brett Anderson (9-5, 3.86 ERA) has won three of his previous four starts. His nine victories overall are two more than he had in the previous three seasons combined. Anderson last pitched against the White Sox in 2011. Chicago RHP Reynaldo Lopez (4-8, 6.34) has one win in nine road starts.