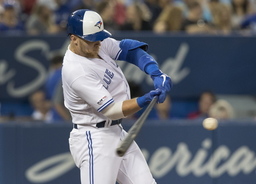 All three homers came off Sale (3-8), who lost for the first time in six starts. It's the second time this season Sale has allowed three homers - he also did it in his opening day outing against Seattle on March 28.

"I'm supposed to be a big part of this team, a big part of this pitching staff, and I've probably been the biggest crutch," Sale said. "I know who I am and who I'm supposed to be for this team and I haven't been anything close. I'm 3-8, that's absolutely embarrassing. On a team like this, they need me to be better and I haven't been there for them.

"I'm standing before you as frustrated as I've ever been."

Sale gave up five runs and a season-high nine hits in 5 2/3 innings. He also allowed five runs in his previous start, June 26 against the White Sox.

"It wasn't good," manager Alex Cora said. "Just a lot of pitches in the zone. I know he's disappointed."

Sale came in 5-1 with a 1.60 ERA in nine career games in Toronto, but couldn't extend that streak of dominance. Instead, he allowed at least four earned runs for the third time in three meetings with the Blue Jays. He's 0-2 with a 7.98 ERA against Toronto this season, and has allowed 23 hits to Blue Jays batters over 14 2/3 innings.

"I'm not locating fastballs, my changeup is terrible, breaking ball is hit or miss," Sale said. "I just haven't been myself for a while and that's obviously frustrating. It's the same thing over and over."

Sale isn't expected to pitch again until after the All-Star break, meaning he'll get at least nine days off before facing the Dodgers at Fenway Park.

"Hopefully when he comes back we'll get him back on track," Cora said.

Drury went 3 for 4 and came within a triple of the cycle. He singled in the third and doubled in the eighth.

Waguespack was pressed into action after Wednesday's original scheduled starter, right-hander Sean Reid-Foley, pitched 3 1/3 innings of no-hit relief in Tuesday's 10-6 loss. Instead, Toronto used right-hander David Phelps to open for Waguespack, who was recalled from Triple-A Buffalo to make his second career appearance.

Rafael Devers hit a two-run single off Waguespack in the third, but Gurriel halved the deficit with a two-out homer in the bottom half, his 15th.

Christian Vazquez restored the two-run lead with a solo homer in the fourth, his 13th and third in the past three games.

Jansen tied it with a second-deck drive in the bottom half, his sixth of the year and fourth in six games.

Drury ended Sale's night with a two-out homer in the sixth, his seventh and first since June 5.

Hudson worked the eighth and Ken Giles pitched a 1-2-3 ninth for his 13th save in 14 opportunities.

Blue Jays shortstop Freddy Galvis went 3 for 3 with a walk, including a double on Sale's first pitch of the game. Galvis padded Toronto's lead with a sacrifice fly off Steven Wright in the eighth.

Blue Jays: RHP Marcus Stroman (pectoral cramp) may need an extra day of rest before his next start, or possibly a stint on the injured list. Stroman left Saturday's start against Kansas City in the fifth inning. He's listed as Toronto's starter for Thursday's series finale. ... OF Teoscar Hernandez (right shoulder) sat for the second straight day.

Toronto has scored five or more in five straight games and 13 of the past 14.

Red Sox SS Xander Bogaerts was one of three injury-replacements named to the AL All-Star team Wednesday. Bogaerts went 0 for 4 with four strikeouts.

Attendance was 16,883, just 542 more than Toronto's Triple-A affiliate, the Buffalo Bisons, drew for their 5-4 home win over Lehigh Valley.

Blue Jays: Reid-Foley was optioned to Buffalo to make room for Waguespack.

Red Sox: RHP Hector Velazquez (1-3, 5.31) will make his eighth start of the season in Thursday's series finale. Velazquez has also made 13 relief appearances.

Blue Jays: If Stroman can't go Thursday, Toronto could promote LHP Thomas Pannone from Triple-A. Pannone has made 23 appearances for the Blue Jays this season, including two starts. He's 2-3 with a 5.91 ERA.