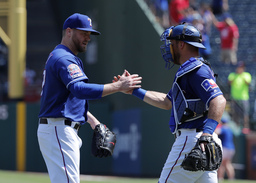 ARLINGTON, Texas (AP) When Elvis Andrus scored on a wild pitch after his RBI triple in the first inning, the Texas Rangers already were feeling pretty good because they had Mike Minor on the mound at home.

Minor limited the Cleveland Indians to one run and three singles over eight innings after they had scored 10 runs each of the last two nights, and Texas earned a series split with a 4-2 victory Thursday.

"That's desperately what we needed right there. Losing two in a row, got beat up a little bit," manager Chris Woodward said. "Just phenomenal, I don't know what else to say honestly. It's every time out, every time he takes the ball he just gives us a good outing."

The Rangers lefty improved to 7-4 with a 2.52 ERA overall. Minor has a 2.03 ERA in eight home starts, allowing only six runs in the last seven since the Chicago Cubs scored six runs against him on opening day back in March.

With the temperature reaching 95 degrees, and heat index at 110 and above, Minor threw 70 of his 110 pitches for strikes. It was the Rangers' 18th game in 17 days, and they have a three-game weekend series against the Chicago White Sox before an off day.

"I knew that it'd be nice to split with these guys," Minor said. "To split here and kind of salvage a little bit, a day game, a hot one and our regular guys still played, I felt good about it just because some of those guys could have easily taken a day off."

Woodward hadn't planned to send Minor back out for the eighth inning, but the pitcher told him he was doing fine.

"He didn't even have sweat on his face," Woodward said.

Shawn Kelley worked the ninth for his ninth save in 13 chances after giving up a leadoff homer to Carlos Santana.

Cleveland, which scored 44 runs in the first six games of its 5-2 trip, got its run off Minor in the sixth on an RBI single by Jordan Luplow after a two-out single and walk.

Andrus also homered, hitting his first homer since May 12 at Houston right after Danny Santana had gone deep in the eighth to make it 4-1. It was the seventh homer for both players, the third for Santana in the four-game series.

Santana doubled and stole third in the first before Andrus tripled to right-center. Andrus scored on a wild pitch by Shane Bieber (6-3) that ricocheted off catcher Kevin Plawecki and went several feet in front of the plate.

"It was just kind of a funky inning ... (Plawecki) made a nice block but it kind of sprung back out off his leg. That was just kind of an awkward play," said Bieber who didn't allow any more runs while striking out eight without a walk in six innings.

"I thought he battled his (behind) off. First inning, he's giving up some hard contact, a couple runs and then he just battled the rest of the way," manager Terry Francona said. "Matter of fact, if we tied that game we were going to let him go back out."

THREE Ks, YOU'RE OUT

Rangers third baseman Asdrubal Cabrera was ejected in the sixth after disagreeing with a called third strike. While Woodward was out discussing the ejection with home plate umpire Doug Eddings, Cabrera tossed his batting gloves from the dugout toward the plate. Cabrera struck out all three at-bats.

Andrus, the Rangers shortstop, went up the middle and stretched to field a grounder by Jason Kipnis before a spin move and throw in the fifth. Ronald Guzman, their 6-foot-4 first baseman, made a full split to complete the out. That was an inning after a heads-up play by second baseman Rougned Odor, who was in shallow right field when he let a soft popup by Jose Ramirez fall to the ground and started a double play . ... Indians 1B Jake Bauers also had an impressive stretch to retire Shin-Soo Choo after second baseman Kipnis fielded the ground.

Rangers: RF Nomar Mazara got a scheduled day off for some extra rest and healing after playing two games since missing two games with right hamstring tightness.

Rangers: Ariel Jurado (4-3) starts the opener of a weekend series against the Chicago White Sox.