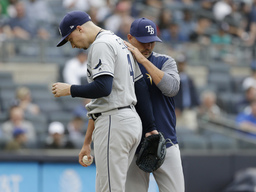 NEW YORK (AP) It's not unusual for Rays manager Kevin Cash - pioneer of the relief opener - to have his bullpen warming as early as the first inning. It's just never happened with a defending Cy Young Award winner on the mound.

The surging, slugging New York Yankees are on that kind of roll.

Gary Sanchez hit a three-run homer to help chase Blake Snell in the first, CC Sabathia got his 250th career win and the Yankees thumped Tampa Bay 12-1 Wednesday to complete a three-game sweep.

Gleyber Torres added a grand slam during a six-run seventh inning, and New York three-hit the Rays to win its fifth in a row and extend its AL East lead over second-place Tampa Bay to 3 1/2 games.

"For us to have that kind of series against them right there, that's a nice way to go into the evening," New York manager Aaron Boone said.

Tampa Bay was swept for the second time this season - the other came against Boston in April.

"Not a lot went well today," Cash said. "It's a good thing this loss only counts as one."

Snell (4-6) walked four, gave up two hits and was charged with six runs while getting one out on 39 pitches in the shortest start of his career. He is the first reigning Cy Young winner to allow at least six runs and get no more than one out in a start, according to STATS.

"That's the ultimate job of controlling the strike zone right there," Boone said. "We took everything that I think he normally gets chases on, a lot of those pitches."

Colin Poche replaced the left-hander with the bases loaded, hit Gio Urshela with a pitch and allowed a two-run single to DJ LeMahieu before ending the inning. Snell's previous shortest start was one-plus inning against the Yankees on Sept. 26, 2017.

"I'm happy with how I'm pitching, I like the way it feels coming out of my hand," Snell said. "I just need to be more in the zone, more aggressive, more of an attack mindset."

Sabathia (4-4) pitched one-run ball over six innings. He struck out seven and allowed three hits and three walks. The 38-year-old has a 2.06 ERA in six starts against the Rays over the past two seasons.

Sabathia is the 14th pitcher with 3,000 strikeouts and 250 victories. Twelve are in the Hall of Fame, and the other is Roger Clemens.

"It's crazy to put my name up there with some of those guys that I idolized," Sabathia said. "Some of those names that are enshrined in baseball history and to be a part of that, it's a big deal. It's fun to have those numbers."

New York had just three hits during the six-run first inning. Sanchez's homer was his 21st in 54 games this season. The Yankees have homered in 22 consecutive games, three shy of the franchise record from 1941.

After the rocky first, Tampa Bay's bullpen retired 16 straight before the Yankees got going all over again in the seventh. Sanchez hit an RBI double and Torres delivered his first career slam while New York batted around for the second time.

The Rays used eight relievers before moving third baseman Daniel Robertson to the mound to start the eighth. He pitched a 1-2-3 inning thanks to a double play.

Snell had his second straight rocky start and attributed this one to timid fastball usage. Cash thought control was the larger issue, particularly with his offspeed pitches.

"Right now, he can't land a breaking ball the way we've seen him in the past," Cash said. "The changeup is not there for him. He throws that really well generally behind in the count. It's not there for him. A lot of it is the command. The stuff has not changed whatsoever."

The Yankees released Danny Farquhar , ending the relief pitcher's comeback try with New York more than a year after he collapsed in the Chicago White Sox dugout because of a ruptured aneurysm and brain hemorrhage. Farquhar made two appearances with Triple-A Scranton/Wilkes-Barre this month, allowing seven runs in three innings.

Yankees: LHP Jordan Montgomery is returning to New York for an MRI on his left shoulder a day after cutting short a live batting practice session against minor league hitters. Montgomery is recovering from Tommy John surgery in his left elbow. ... OF Giancarlo Stanton was rested a day after returning from the injured list following biceps, shoulder and calf injuries. ... OF Aaron Judge (left oblique strain) was back in the lineup with Scranton/Wilkes-Barre. He's expected to rejoin the Yankees on Friday.

Rays: RHP Charlie Morton (8-1, 2.37) starts the opener of a four-game series at Oakland on Thursday night. RHP Frankie Montas (9-2, 2.85) is up for the A's in a showdown of potential AL All-Star pitchers.