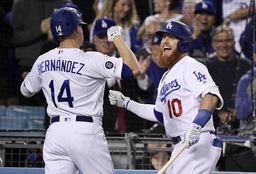 LOS ANGELES (AP) Even if his velocity isn't what it used to be, Clayton Kershaw's competitive zeal hasn't waned.

He combined with two relievers on a four-hit shutout, Enrique Hernandez had a pinch-hit grand slam to highlight a six-run seventh, and the Los Angeles Dodgers routed the rival San Francisco Giants 9-0 Tuesday night for their major league-leading 10th shutout of the season.

Kershaw (7-1) allowed three hits, struck out six and walked two. The left-handed ace improved to 23-11 in his career against the Giants and lowered his ERA against them to 1.68 in 337 1/3 innings.

"I got a little better as the game went on," Kershaw said. "The first few innings I didn't land my curveball as well. It was a little bit of a grind."

Still, Kershaw worked efficiently. Brandon Belt was hitless with a walk in three at-bats, Buster Posey was 0-for-4 with a strikeout and Evan Longoria went 1 for 3 with a walk.

Posey marveled at Kershaw's consistency throughout his career.

"Obviously, the velocity's down a little bit right now but he's still getting good movement on his pitches," Posey said. "The guy's the ultimate competitor and I enjoy facing him because I know he's bringing his best every time out."

Dylan Floro struck out three in the eighth and Joe Kelly finished it off in the ninth, giving up a hit and a walk to go with one strikeout.

The Dodgers improved to 11-1 in Kershaw's 12 starts this season.

"He just kind of outwills the other team," catcher Austin Barnes said. "I didn't think he ever felt that great. I think he was frustrated with his command."

Hernandez slugged his second career grand slam - and first in five years - off Trevor Gott after coming in 2 for 15 on the homestand.

The Dodgers batted around in the seventh while extending their lead to 9-0.

"It got ugly there," Giants manager Bruce Bochy said.

Pinch-hitter David Freese got the scoring started with an RBI groundout to third base and Barnes added an RBI single. Hernandez cleared the bases with a 416-foot shot to left field.

Clinging to a 2-0 lead in the sixth, Kershaw caught Donovan Solano stealing after issuing him a leadoff walk. Cody Bellinger made a leaping catch with his back to the wall in right on Tyler Austin to save a potential run.

The victory kept the Dodgers from losing two in a row at home for the first time since mid-April after they dropped the series opener 3-2. They had 14 hits - with all 11 position players reaching base and 10 getting at least one hit - and left 10 runners on base.

Rookie Shaun Anderson (2-2) gave up three runs and seven hits in 5 2/3 innings. The right-hander struck out two and walked three.

The Dodgers jumped on Anderson in the first, taking a 2-0 lead. Joc Pederson hit his 19th homer leading off the game and Justin Turner doubled in the other run.

Chris Taylor reached on a bunt single in the sixth when no one was covering first after Brandon Belt got pulled off, making it 3-0.

Giants: INF Pablo Sandoval got the day off against left-handed pitching after injuring his right pinky finger when it was stepped on by a baserunner. He's day to day with four stitches in his finger.

Dodgers: RHP Kenta Maeda (sore right wrist) took a comebacker off his wrist Monday. X-rays were negative and he'll get an extra day of rest before his next start. ... LHP Scott Alexander (forearm) will have a minor league rehab assignment next week. ... OF A.J. Pollock (sore right elbow) will work out at the team's spring training facility in Arizona before going on a rehab assignment.

Left fielder Pederson took grounders at first base and Dodgers manager Dave Roberts indicated a position change is in the future. The move would keep Pederson's home-run hitting bat in the lineup. The outfield is already set: Pollock is expected back after the All-Star break, rookie Alex Verdugo has proven reliable and Cody Bellinger has moved from first base to protect his shoulder. Max Muncy alternates between second and filling in for Turner at third. "(Joc) is actually more excited about playing first base than I've seen him excited about anything, outside of hitting a homer," Roberts said.

A spot starter will be added to the Dodgers' rotation in the next three or four days, said Roberts who didn't name the person. It's needed while Maeda gets rest.