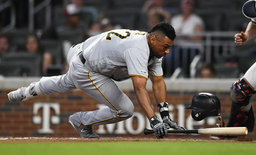 ATLANTA (AP) Now that his knee is healthy, Brian McCann showed he has plenty of power left at 35 years old.

McCann hit one of four Atlanta homers in the second inning and took Pirates starter Chris Archer deep again with a tiebreaking, three-run shot in the sixth to help the Braves beat the Pittsburgh Pirates 7-5 on Tuesday night.

"It probably hurt me for a little bit there, but once I got it fixed and I came back in September last year, I knew I could make an aggressive move on the baseball," he said. "I'm healthy. I feel good. Got my bat speed back."

The Braves, tied for first in the NL East, have won five straight. The game was called following a 1-hour, 48-minute rain delay after eight innings.

McCann put the Braves up 7-4 in the sixth, pulling a fastball into the right-field seats. He made a winner of Touki Toussaint (4-0), who relieved after another ineffective start by Mike Foltynewicz.

The Braves hit four homers off Archer to take a 4-2 lead in the second as Josh Donaldson and Nick Markakis went back-to-back and were followed one batter later by McCann and Ozzie Albies.

Donaldson's ninth homer ricocheted off the right-field foul pole, and Markakis followed with a 417-foot homer to center, his sixth of the year. McCann's opposite-field shot sailed into left-center. He was followed by Albies, who pulled his 10th homer into the right-field seats.

"We have speed, we're athletic, we make you throw strikes," said McCann, who's back with the Braves after five years in the AL. "We're tough to get through on a nightly basis from top to bottom, so it's nice to show it again tonight."

Archer gave up seven runs and eight hits with two walks while striking out eight in six innings. He had won two straight starts after dropping five in a row. His five homers allowed were a single-game career high.

"Man, I was throwing stuff right down the middle," Archer said. "No matter how hard you're throwing, how good your stuff was the inning before or the game before, if you throw stuff down the middle, you're going to get blasted and they're an aggressive team. They jumped me. I didn't make the adjustment. That was pretty much the ballgame."

Foltynewicz's ERA rose 13 points to 6.02. He threw a wild pitch that advanced two runners in the first and trailed 2-0 on Josh Bell's two-run single. He began the third by walking the pitcher. He walked Bell to begin the fourth and allowed him to score when Colin Moran's double made it 4-3.

The Pirates tied it at 4-all in the fifth when Kevin Newman singled, advanced to third on Corey Dickerson's single and scored on a grounder.

Bryan Reynolds' pinch-hit, RBI triple off Anthony Swarzak cut the lead to 7-5 in the eighth.

A.J. Minter was back with the Braves for the first time since getting sent to the minors five weeks ago and losing the closer's role. He allowed one run and one hit with one strikeout in one inning.

Bell has 60 RBIs and began the game leading the majors.

Atlanta placed RHP Kevin Gausman on the injured list with plantar fasciitis. ... Pirates RHP Chris Stratton, sidelined with right side discomfort, was to begin a rehab assignment with Indianapolis.

McCann's first homer was his first as a Brave in Atlanta since September 13, 2013, against San Diego. ... The second, his fifth of the season, gave him 15 career multi-homer games.

Pirates: RHP Mitch Keller (0-1, 13.50 ERA) is expected to be recalled from Triple-A Indianapolis and make his second career start.