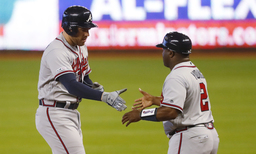 MIAMI (AP) The Atlanta Braves' latest win over the Miami Marlins was so difficult to describe that Brian Snitker needed two hyphens for one word.

Yep, it's in the dictionary, and next to it should be the box score from Atlanta's wild 12-inning comeback victory Sunday.

Ronald Acuna Jr. hit a three-run homer in the ninth inning and Matt Joyce delivered a tiebreaking RBI single in the 12th to help rally past Miami 7-6.

The Braves overcame a 5-1 deficit in the ninth against closer Sergio Romo. One run came home on a balk, and Acuna tied the score with one out by pulling an 0-1 slider for his 14th homer.

"Wow," a dazed Romo said to himself as Acuna circled the bases.

"I was extremely excited," Acuna said through a translator. "This team fights every moment of the game until the 27th out is recorded."

The Braves earned their seventh consecutive victory in Miami, a record in the series, and have won eight of the nine games between teams this year. They swept the Marlins for the 25th time, and for the second time in 2019.

"You get tired of dealing with those guys, honestly," Miami manager Don Mattingly said. "They're a tough club to beat."

"The Marlins were playing exceptional baseball," Joyce said. "It was pretty cool to battle back and steal that one from them late."

Both teams scored in the 10th, the Braves thanks to four consecutive two-out walks by Tyler Kinley. Ozzie Albies hit a one-out triple in the 12th off Adam Conley (1-6) and scored on Joyce's third hit of the game.

The clutch hits were a change for the Braves, who began the ninth batting 8 for 58 (.086) with runners in scoring position on their six-game trip.

"The guys kept coming and never quit," Snitker said. "It would have been easy just to cash it in."

Braves closer Luke Jackson blew a save in the 10th when Martin Prado hit an RBI double, but the right-hander limited the damage by striking out the next two batters to end the inning.

Dan Winkler (3-1) retired both batters he faced in the 11th. Josh Tomlin, the Braves' eighth pitcher, worked around a one-out single in the 12th for his first big league save - he had three saves in the minors, back in 2008 at Class A.

Austin Dean had three run-scoring hits for Miami, including a homer to lead off the first inning, and hiked his average from .183 to .219.

Atlanta's Max Fried gave up three runs in six innings and doubled home the Braves' first run in the third. Pablo Lopez allowed one run in six innings for Miami, lowering his home ERA to 1.78 in six starts this year.

The Braves improved to 47-23 at Marlins Park.

Romo blamed execution rather than pitch selection for his meltdown.

"I've got to be better than that," he said. "It definitely hurts."

Romo's ERA rose to 5.48. A shaky bullpen is one reason Miami has the worst record in the National League.

"We've had our share of these types of losses," Mattingly said. "These are the ones that hurt the worst."

Second baseman Albies saved a run in the fifth. With runners at the corners and two out, he made a running backhanded grab of Brian Anderson's one-hopper up the middle, and whirled and threw to first for the out.

Braves: They return home to open a four-game series against the Pittsburgh Pirates on Monday, when RHP Kevin Gausman (2-5, 6.15) is scheduled to start.

Marlins: RHP Sandy Alcantara (3-5, 3.80) is scheduled to start Monday when Miami opens a three-game series at home against St. Louis. The Cardinals are 60-35 in Miami.