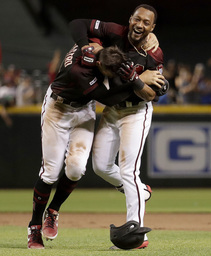 PHOENIX (AP) Tim Locastro's arms and legs are covered in sizable bandages after being hit by pitches eight times in 18 major league games this season, including Saturday.

But the Arizona Diamondbacks' reserve outfielder wasn't feeling too much soreness after delivering his first career walk-off hit.

Locastro drove in the tie-breaking run with one out in the 11th inning, giving the Diamondbacks a 6-5 win over the New York Mets.

"I got a pitch I could handle and drove it to the outfield," Locastro said, smiling when asked about all hit-by-pitches.

"When an opportunity like that presents itself, where I can get on base any way I can, then I can try to score. Whatever it takes to score. That's just the way I was brought up."

Kevin Cron, called up from Triple-A Reno before the game, doubled off Mets reliever Tyler Bashlor (0-3) to start the bottom of the 11th inning. He took third on Nick Ahmed's sacrifice bunt, and after an intentional walk, Locastro came up as the Mets brought Juan Lagares in from center field as an extra infielder.

Locastro drove a 2-2 pitch beyond the reach of the Mets' two-man outfield for a single. Afterward he said he wasn't even aware, until getting to the clubhouse that the Mets had brought in a fifth infielder.

"I guess it worked to my benefit," he said.

"He's just a catalyst. To stand up there in that situation with the infield down his throat practically, having their hands in his pockets, he doesn't swing at a pitch that he doesn't want and he gets something that he can elevate and he did a great job," Diamondbacks manager Torey Lovullo said of Locastro. "I can't say enough good things about what he's done for this team and the energy that he brings every single day."

The Mets coughed up a late lead of at least four runs for the second time in four games. They had an 8-3 lead at Los Angeles on Wednesday night before losing 9-8.

Yoshihisa Hirano (2-3) pitched a scoreless 11th inning for the win.

Adam Jones hit a two-run home run off Mets reliever Robert Gsellman with one out in the bottom of the eighth that tied the game at 5-all, completing a comeback for the Diamondbacks.

"I felt like it really energized this entire ball club and one guy did that with one swing of the bat, but it was built by several people and several key situations that made that happen," Lovullo said. "These are the types of wins that push you in a really positive direction."

Arizona started the inning down 5-1, and used a single by Ketel Marte and sacrifice fly by Eduardo Escobar - both off the Mets' Jeurys Familia- to cut the lead to two runs. Jones then hit a drive that cleared the wall in left-center for his fourth career game-tying home run in the seventh inning or later.

Mets manager Mickey Callaway admitted not wanting to use Gsellman for a fourth time in five nights, but went to him with Familia struggling.

Todd Frazier and Dominic Smith homered for Mets, who have 19 home runs in their last nine games.

Jacob deGrom limited the Diamondbacks to one run over 6 2/3 innings before leaving Saturday's game due to a right hip cramp that doesn't appear serious, he and Callaway said. DeGrom struck out seven and held the Diamondbacks hitless from the second through the fifth innings. He faced a former Cy Young winner for the third time this season, Arizona ace Zack Greinke.

"I said I was fine. I wish I could have stayed out there," deGrom said. "I was frustrated. It just cramped up for a second. I wanted to throw a couple of pitches to make sure it was fine, and it was. It's a tough loss for us."

Greinke didn't have an ace-like performance, and afterward revealed he was dealing with a neck cramp. The Mets worked five 3-2 counts in the first two innings, and in the fourth teed off on Greinke with five straight hits. Frazier's homer sailed into the left-field seats, a two-run shot, and after two singles, Tomas Nido had an RBI single that made it 4-0.

In the midst of the Mets' rally, Diamondbacks manager Torey Lovullo came out of the dugout with a trainer to check on Greinke, but the right-hander remained in the game.

Greinke's night was over after four innings, his shortest outing since opening day in Los Angeles. He allowed four runs on seven hits and is winless in his last three starts.

The Diamondbacks broke through against deGrom in the seventh. Jones doubled and scored on a throwing error by Mets second baseman Adeiny Hechavarria with two outs.

Smith connected on a pitch high in the strike zone from Zack Godley to lead off the eighth with his third homer of the season, giving the Mets a 5-1 lead.

PERSONAL CATCHER, OR NOT

Callaway was asked if Nido is deGrom's personal catcher, given that No. 1 receiver Wilson Ramos wasn't in the lineup for a third consecutive start.

Callaway stopped short of affirming it as such, and said Ramos has to eventually catch deGrom starts. DeGrom's earned run average was more than four points lower with Nido than with Ramos going into Saturday's start.

"Ramos has caught all the other (starters) three times and he's not their personal catcher," Callaway said. "It's just something that we can line up when we can and we feel that there's some value to it at this point."

Ryan Additon worked second base for Saturday's umpire crew, replacing the injured Jim Wolf, who left Friday's game after being struck in the mask by a foul ball in the second inning.

Mets: IF Robinson Cano (quadriceps strain) appears on track to come off the injured list on Sunday. It will depend on how he feels when he arrives at Chase Field on Sunday morning.

OF Brandon Nimmo (stiff neck) is doing baseball activities and has been eligible to be activated since Friday. ... LHP Justin Wilson on Friday threw off a mound for the first time since being placed on the injured list with elbow soreness.

Diamondbacks: OF David Peralta (right shoulder) got at-bats in an extended spring training game earlier Saturday, and manager Torey Lovullo said he felt fine. Lovullo said he thinks Peralta can avoid a rehab assignment. ... IF Jake Lamb (strained quadriceps) also got at-bats but didn't run the bases. ... The Diamondbacks called up Cron two days after sending him down, placing C-OF Blake Swihart on the 10-day injured list with a strained right oblique. Lovullo said Swihart was hurt doing defensive drills in the outfield while the team was playing the Colorado Rockies in Denver earlier this week.

Mets: LHP Steven Matz (4-3, 3.55 earned run average) is coming off a win over the otherwise sizzling Los Angeles Dodgers in his last start. He's on deck to face the Diamondbacks on Sunday, and the Mets are 7-3 in his 10 starts this season.

Diamondbacks: RHP Merrill Kelly (4-6, 4.83 ERA) is set to make his first career start against the Mets. Opponents are batting .284 against Kelly this season.