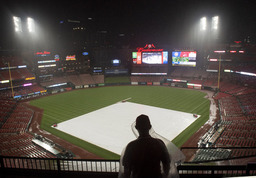 ST. LOUIS (AP) The once-struggling Cardinals are quickly putting their woeful May behind them.

Dexter Fowler and Harrison Bader hit back-to-back homers in the eighth inning, and St. Louis outlasted the Chicago Cubs in a 7-4 victory that ended early Sunday after a rain delay of over three hours.

"To kind of get it going and have some things go our way, when they weren't really going our way, feels really good," Bader said. "There's a lot more work to do on a day-to-day basis. This team is super-talented."

Paul Goldschmidt also hit a home run for the Cardinals (29-28), who have won three straight for the first time since a five-game streak in late April. It was also St. Louis' first series win since April 30 against Washington.

"We just want to play well, consistently," Goldschmidt said. "I don't think we were that far off in May. We just really weren't winning games. It's good to kind of get some results with our play. We really aren't doing anything completely different. Just one swing or one play here or there. It's good to do a few days in a row, but it's going to be a long year.

"This division's tough, so we're going to need to do it for the next four-plus months."

The game was delayed 3 hours and 37 minutes after the fourth inning.

Anthony Rizzo and Jason Heyward homered for the Cubs, who have lost five of their last six games and three consecutive series.

"They got us," Cubs manager Joe Maddon said. "They got us. We have to sleep fast and come back tomorrow."

The Cardinals had closed out a rough month of May with two straight wins. They avoided the worst winning percentage for May in the franchise's long history by going 9-18 (.333) and had lost eight straight series, a streak that began by being swept by the Cubs in early May.

Rizzo's first-inning solo home run was his team-leading 16th and extended his hitting streak to 13 games. Rizzo is hitting .440 (22-50) during the streak.

Goldschmidt tied it in the bottom of the opening inning with his 12th homer.

Heyward's ninth homer, a solo shot, put the Cubs up 2-1 in the second, but Marcell Ozuna's RBI single in the third - his 500th career RBI - tied it again.

Cubs starter Jose Quintana allowed two runs and four hits in four innings. He struck out six and walked one before giving way to Tyler Chatwood (3-1) after the rain delay.

Cardinals starter Jack Flaherty allowed two runs and five hits and struck out eight in five innings. He was replaced by Gant.

RBI doubles by Matt Wieters, Fowler and Kolten Wong against Chatwood gave the Cardinals a 5-2 lead in the sixth.

The Cubs answered with two runs in the seventh to make it a one-run game. David Bote had an RBI double to right field and scored on a fielder's choice by Kris Bryant.

Fowler and Bader gave the Cardinals a cushion with their back-to-back opposite-field home runs in the eighth.

"Yeah, that was pretty sexy," Bader said. "That was sick."

Cubs reliever Pedro Strop is getting closer to returning from his hamstring injury. He is set to make one more appearance for Triple-A Iowa on Sunday.

"With everything, good health, and that he comes out of it feeling well, I would imagine that he would be back with us right after that," Maddon said. "We're just trying to be true to him and biology, how long it's supposed to take to come back from that injury. Even though he's felt really well, we just thought it wasn't wise to push it right now. So let him go do all this, do it right, and then we'll make our determination."

Cubs: SS Javier Baez was scratched with a right heel contusion, first sustained on May 19, and is considered day to day. "For him to say something, it had to be pretty sore," Maddon said before the game.

Cardinals: C Yadier Molina (right thumb tendon strain) got a second opinion on his injury on Friday which confirmed no surgery would be needed. "I can throw the ball, I just can't grip," Molina said.