Gallo homers, leaves with injury in Rangers' 6-2 win over KC 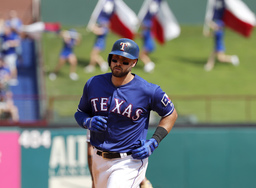 Gallo hit a tie-breaking home run for the second straight game before leaving in the fifth inning due to injury as the Rangers beat the Kansas City Royals 6-2 Saturday.

Gallo was removed because of tightness in his left oblique while batting. He had an MRI and passed some strength tests after the game.

"If there's something in there, we'll find out," Rangers manager Chris Woodward said. "I guess we'll plan accordingly after that."

Lance Lynn (7-4) allowed both runs. He yielded six hits and a hit batter, striking out seven for his fifth straight quality start.

The Royals have lost five of their last six games and have the worst road record in the majors at 8-22. Kansas City was 2 for 11 with runners in scoring position.

Gallo broke a scoreless tie in the fourth inning, hitting a 1-0 pitch from Homer Bailey (4-6) over the home bullpen in right-center for his 17th of the season, good enough for a tie with four others for the American League lead. On Friday night, Gallo hit a grand slam in the sixth inning in a 6-2 win over the Royals.

Woodward said Gallo initially felt the pain earlier in the game when throwing. In the dugout before batting in the fifth inning, Gallo told Woodward it didn't feel like a "muscular thing . like a chiropractor popped him the wrong way."

Woodward went up to the plate along with trainer Matt Lucero after Gallo's first swing only to be assured he felt fine.

"He basically lied to me," Woodward said. "Then on the next pitch he swung and felt something. And I just said, `OK, you're out.'"

Bailey gave up four runs on six hits and two walks in 3 2/3 innings for his fourth straight start without a victory. He allowed only a first-inning single to Nomar Mazara before Hunter Pence led off the fourth with an opposite-field ground single to right ahead of Gallo's homer.

Martin Maldonado and Cam Gallagher, who replaced Maldonado behind the plate in the sixth inning, had RBI doubles. Maldonado was pulled as a precaution with right forearm tightness.

The Rangers are 29-27, good enough to be the conversation for a wild-card playoff berth at this point, after losing 95 games last season.

Lynn's opinion of where his club stands?

Pence and Royals RF Whit Merrifield each had two hits for the second straight game. Merrifield has hits in 10 of his last 11 games. ... Rangers C Jeff Mathis had a sacrifice fly for his third RBI of the season in 31 games, his first since April 24. ... Five of Texas' six hits off Bailey were by left-handed hitters. The 33-year-old right-hander entered the game holding left-handed batters to a .213 batting average. ... Rangers RHP Jose Leclerc struck out both batters he faced and has 21 strikeouts in 9 2/3 innings over his last nine appearances. ... Maldonado has a .327 career batting average at Globe Life Park. ... Texas placed RHP Jeanmar Gomez on unconditional release waivers after designating him for assignment last Sunday.

Royals: RHP Brad Keller (3-6, 4.56) leads the AL with 42 walks. Keller allowed only one last time out - but also 10 hits - in giving up four runs in six innings in a loss to the Chicago White Sox on Tuesday.

Rangers: RHP Adrian Sampson (3-3, 4.53) has won his last three outings, each following an opener. Sampson will make his first true start since May 12 and sixth of the season.