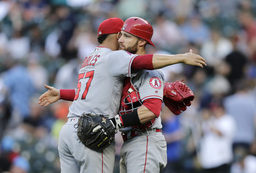 SEATTLE (AP) Kole Calhoun has the same routine after every game: watch video of his at-bats. It doesn't matter if the Los Angeles Angels win or lose, or if Calhoun has a good night or bad.

So, after the right-fielder hit a game-clinching two-run homer in a 6-3 win over the Seattle Mariners on Saturday, Calhoun didn't celebrate. Instead, he sat in front of a video monitor.

What he saw in his eighth inning at-bat against Roenis Elias was pleasing.

Calhoun and Mike Trout hit late home runs to backstop a strong no-decision by Andrew Heaney, who struck out 10 but was chased by two home runs from Edwin Encarnacion. It was the sixth win in the last eight games for the Angels.

And like Calhoun, they seem to be finding their groove as the season rolls into June.

Albert Pujols hit a two-run homer in the top of the first inning to become the 18th player in major league history to hit 10 or more home runs in at least 19 seasons. And Cesar Puello doubled in David Fletcher in the third to give Heaney a 3-0 lead, before beating out slow roller for an infield hit in the eighth to set up Calhoun's two-run shot.

Heaney made that early lead stand up for five innings. At one point, he retired 10 straight batters. He also struck out four straight, including the Seattle side in the second. But Encarnacion did him in with a solo homer in the fourth to left field and a two-run shot in the sixth. Heaney got out of the inning with two straight strikeouts, but was replaced to start the seventh.

Encarnacion watched the ball sail toward the wall for a few seconds before starting his trot.

"You want to get more out of days like today than six innings and three runs," Heaney said. "Obviously, in that situation in the game, that's not what I'm trying to do there with that 3-2 pitch. He capitalized on it."

As he has his entire career. Encarnacion's 34th multi-homer game came a day after he sat out following a root canal and moved him past Jim Edmonds into 60th on the career homer list. He's five shy of 400.

"It's bothering me, yeah," Encarnacion said of the dental procedure, "but when I swing like that I can feel nothing."

Trout added an insurance run in the ninth inning with his 14th home run of the season, while three relievers helped the team hold on for the win. Cam Bedrosian (2-3) earned the victory in relief and Hansel Robles earned his seventh save. Bedrosian, Ty Buttrey and Robles each pitched one inning of relief with one strikeout.

The Mariners, conversely, were left with another bullpen loss. More concerning was the appearance by Elias, who got L.A. to hit into a double play in the eighth, but then gave up the home run to Calhoun. Elias had been one of the team's only consistent relievers.

"He was so good for us for such a big chunk of April and May," Seattle manager Scott Servais said. "The last couple weeks he just hasn't been the same with his stuff."

Mariners first baseman Jay Bruce found himself in the familiar position of being the subject of trade rumors Saturday, one day after he hit his 300th career home run. Bruce was not in the lineup, but said he knows nothing more than what he's read on the internet about reports Philadelphia is interested in the 32-year-old, 10-year veteran. Bruce was held out of the game with Servais joking that he'd spent the night partying after becoming the eighth active player with 300 home runs and 300 doubles.

"I have no news honestly," Bruce said. "I have nothing to speak on other than what's put out on the internet. Everyone probably knows that I'm available via trade. So that's still where we are honestly. I wouldn't try to fleece you guys."

Seattle has decided to have Yusei Kikuchi skip his scheduled start Tuesday against Houston as part of the plan to strategically rest the Japanese lefthander during his rookie season. Seattle manager Scott Servais was not sure whether Kikuchi will miss a full turn or return somewhere earlier in the rotation. He also wasn't sure who would be called up to take Kikuchi's start.

Kikuchi has given up 10 hits in each of his last two starts, lasting just 3 1/3 innings in each loss.

Angels: Top pitching prospect LHP Jose Suarez (0-0, 0.00 ERA) has been called up and will make his major league debut Sunday, though manager Brad Ausmus had not decided Saturday whether that would be as a starter or in relief of an opener.