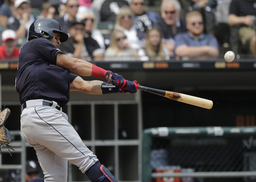 CHICAGO (AP) A day after the Chicago White Sox benefited from a bunch of Cleveland mistakes, they doomed themselves with a big blunder on the bases.

Carlos Santana and Leonys Martin homered and the Indians took advantage of a lapse by the White Sox to end Chicago's five-game streak with a 5-2 victory on Saturday.

The Indians, who made four errors in a 6-1 loss Friday night, climbed back to .500 and prevented the White Sox from reaching the break-even mark for the first time since April 5.

"I know we're not going to be perfect. We got some young guys and some inexperience, but I like the way they came out with some energy and played, a lot," Indians manager Terry Francona said.

"Shoot, I'm not rooting against them, I'm dying with these guys. When we struggle I feel like it is on me more than them. I don't ever want it to be them and me," he said.

Chicago loaded the bases with no outs in the third on a single by Tim Anderson and walks to Yolmer Sanchez and Charlie Tilson, and Leury Garcia hit a sacrifice fly for a 1-0 lead.

But the Indians escaped further damage when pitcher Jefry Rodriguez trapped Sanchez off second with a pickoff throw, leading to a pair of outs.

Sanchez got caught in a rundown and was tagged by third baseman Jose Ramirez, who then threw over to first base to get Tilson retreating to the bag to end the inning.

"It's obviously not a good situation with 2-3-4 up there right now. He (Sanchez) got a little antsy. They just alerted him (Rodriguez) that he was on the move and they countered," White Sox manager Rick Renteria said.

"Not one of the best plays and then ultimately turned into a double play by picking Tilly at first. Both guys (baserunners) have their own assignment on what to do in a situation like that," he said.

Santana extended his on-base streak to 18 games and is hitting .339 with six home runs during that stretch.

"The year before I tried to pull all of the time, but this year my approach is to use all of the field and not try as much," Santana said.

Jake Bauers hit a leadoff double in the Cleveland seventh and with two outs, Martin broke an 0-for-14 slump with his seventh home run.

"I made a mistake in that last inning. I fell behind the guy (Martin). I kept throwing the changeup. It was too hard. It stayed right in the middle and he put a good swing on it," Nova said.

"He had some shoulder tightness, he wanted to pitch like crazy and he fought us on it, none of us thought it was a good idea for someone to go out there. It doesn't make any sense. I thought our bullpen picked it up from there," Francona said.

Francona said Rodriguez will have an MRI on Sunday or Monday.

Brad Hand pitched a perfect ninth for his 16th save in 16 chances.

Yonder Alonso had a sacrifice fly in the Chicago seventh that made it 4-2. Kevin Plawecki added an insurance run with an RBI single in the Cleveland ninth.

Indians: RHP Mike Clevinger (strained upper back muscle) was on schedule to throw a simulated game at the Indians' training facility in Goodyear, Arizona on Saturday. ... OF Tyler Naquin (left calf strain) is continuing his rehab assignment with Triple-A Columbus and was expected to play on Saturday night at Durham. ... Francona said OF Bradley Zimmer (right shoulder surgery in July 2018), played at Goodyear on Friday. The 26-year-old Zimmer could be ready to move to Triple-A in the next phase of his rehab. "From what the medical people say it would be a minimum of two weeks to be where he has ramped up and then you can make a decision not necessary on his health, but on baseball. That's kind of the way they described it. That's probably the low end. Two or three weeks, then you can make a decision. All of a sudden it's not a medical decision, it's a baseball decision," Francona said.

White Sox: Catcher Welington Castillo was activated from the concussion list. Castillo left the game on May 24 against the Twins after getting hit by two foul tips in the mask. To make room for Castillo, the White Sox optioned catcher Seby Zavala after Friday's win against the Indians.

Indians RHP Zach Plesac faces White Sox RHP Lucas Giolito (7-1, 2.85 ERA) on Sunday afternoon. Giolito has been among the best pitchers in the majors in his last eight starts. His six-game winning streak is tied for the second longest in the majors. He is 6-0 with a 2.20 ERA in his last eight outings. Plesac is scheduled to make his second career start. In his first big league start against Boston on Tuesday, he allowed one run on four hits in 5 1-3 innings.