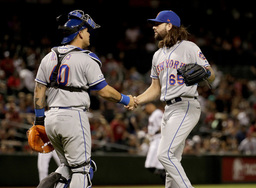 Gomez snapped a tie with a pinch-hit double during New York's bizarre two-run eighth inning, sending the Mets to a 5-4 victory over the Arizona Diamondbacks on Friday night.

Lugo and Gsellman each got three outs after Zack Wheeler (5-3) allowed four runs in seven innings. Gsellman recorded his first save of the season.

"Grateful for the opportunity, and got the job done," Gsellman said.

Lugo and Gsellman got the call because primary setup man Jeurys Familia and closer Edwin Diaz needed a day off.

"Taking care of our players and putting them in a good spot is always something that we're going to think about, as well as winning," Callaway said.

"Thank goodness Wheeler stepped up and went seven for us. Now, we're caught up. We felt like if we had pitched them today, we would be trying to catch up for another week. Lugo and Gsellman stepped up big time and got the job done."

Adeiny Hechavarria had two hits and two RBIs for New York, and Wilson Ramos and Todd Frazier each had two hits.

Arizona lost its fifth straight game, matching a season high. Christian Walker and Ketel Marte homered, but the Diamondbacks were unable to hold on after taking a 4-3 lead.

Pinch hitter J.D. Davis then hit a chopper toward the mound that bounced off Andriese's glove as he reached up. Second baseman Marte could not handle the ball cleanly as the tying run scored.

Gomez followed with a grounder inside the bag at third that drove in Hechavarria, but the ball boy stationed down the line - Arizona uses seniors dubbed "Golden Glovers" - fielded the ball thinking it was foul, and Davis was not permitted to score.

"It doesn't matter if you start the game or not, you have to be ready," Gomez said.

The Diamondbacks trailed 3-1 before scoring three times in the sixth.

Marte opened the inning with his 13th homer. Adam Jones singled with one out, and Walker connected for a 447-foot drive into the second deck of the left field bleachers. Walker finished with three hits and two RBIs after going 4 for 34 on Arizona's 10-game trip that ended Thursday.

"Another grinding loss," Arizona manager Torey Lovullo said. "I can't put my finger on exactly why it was happening. We put ourselves in a good position to win this game. We just couldn't execute and close the deal."

The Mets scored three runs in the second inning, during which play was halted for several minutes when plate umpire Jim Wolf was forced to leave after being struck by a foul ball in the mask.

Michael Conforto led off with a walk against Jon Duplantier in the pitcher's first major league start. Ramos singled before Wolf left during Frazier's at-bat. When play resumed, Frazier dumped an RBI single into center and Hechavarria doubled to center for a 3-0 lead.

Duplantier permitted six hits and threw 77 pitches in five innings. He was on a pitch count after topping out at 65 in his last start at Triple-A Reno.

The celebrated New York subway pizza rat made a guest appearance in the Diamondbacks' "Legends Race," which features big-headed likenesses of Randy Johnson, Luis Gonzalez, Mark Grace and Matt Williams racing from right field to the third base dugout after the fifth inning.

The group stopped for a piece of pizza placed on the track, and the costumed rat darted in from the Mets' bullpen and grabbed the slice.

A 14-second video of a rat dragging a piece of pizza down subway stairs taken in 2015 went viral on Facebook and Twitter, and the short-season Class A Staten Island Yankees have embraced it, too.

Matt Kemp went 1 for 6 while serving as the designated hitter at Triple-A Syracuse on Friday. It was the first game for the veteran outfielder since signing a minor league deal with the Mets on May 24.

Mets: 2B Robinson Cano (left quadriceps strain) took batting practice and fielded ground balls. He is eligible to return from the injured list Sunday. "We still have to see how he recovers every day, but I think the near future is possible," Callaway said.

Diamondbacks: OF David Peralta (right shoulder) had a cortisone shot in his AC joint earlier this week and took batting practice Friday. If he recovers well, he is expected to play in an extended spring training game Saturday. ... 1B/3B Jake Lamb (left quadriceps strain) ran on the infield dirt, hit and threw. He is expected to begin a rehab assignment next week.

Mets: RHP Jacob deGrom (3-5, 3.71 ERA) has won once in his last nine outings despite four quality starts in that stretch. Since opening the season with 24 strikeouts in 13 scoreless innings over two starts, deGrom has a 4.68 ERA.

Diamondbacks: RHP Zack Greinke (6-2, 2.78 ERA) leads the majors with 11 quality starts, all coming after he gave up seven runs and four homers in a loss to the Dodgers in the season opener March 28. He is 5-1 in his career against the Mets.