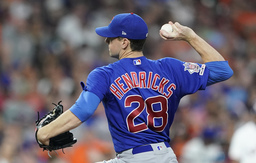 HOUSTON (AP) After a forgettable April, Kyle Hendricks wrapped up a fabulous May with another strong start.

Hendricks pitched eight terrific innings, Kyle Schwarber homered for the second straight game and Kris Bryant added a solo shot in his return to the lineup to help the Chicago Cubs avoid a sweep with a 2-1 win over the Houston Astros on Wednesday night.

"When he gets on a roll, he normally stays on a roll," Cubs manager Joe Maddon said. "He has that kinetic energy that he demonstrates. ... When he's sharp and he's starting to feel it, you just leave him alone."

The game included a scary and jarring moment when a young fan sitting near third base was hit by a foul line drive off the bat of Albert Almora Jr. in the fourth inning. A photo taken by The Associated Press showed the girl apparently conscious and crying as she was whisked away and nearby fans looked on.

After the game, the Astros issued a statement saying the fan was taken to a hospital, but did not disclose any further details on her condition.

Almora, the Cubs' center fielder, and other players from both teams were visibly shaken by the scene.

Still upset after the game, a somber Almora said he received "unofficial updates" on the girl's condition but was advised not to share any details.

"Right now I'm just praying and I'm speechless," he said. "I'm at loss of words. Being a father, two boys ... but God willing I'll be able to have a relationship with this little girl for the rest of my life. But just prayers right now and that's all I really can control."

Hendricks (5-4) allowed four hits and one run with seven strikeouts for his fourth straight win. Steve Cishek worked a perfect ninth for his fifth save.

Schwarber got things going for the Cubs with his second leadoff homer this season. He sent the third pitch from Wade Miley (5-3) into left-center for his 10th home run.

There were two outs in the third when Bryant, who missed the previous two games after an outfield collision with Jason Heyward on Sunday, homered to straightaway center field to make it 2-0.

After Almora hit a line drive into the stands down the third base line, where it hit the young girl, he immediately put his hands on his head and took a couple of steps toward the seats. He then fell to his knees near home plate and was consoled by Heyward and Maddon.

It took several minutes for Almora, who appeared to be crying, to compose himself and continue the at-bat.

The girl was picked up by a man who appeared to be with her and he dashed up the stairs not long after she was struck. After the fourth inning, Almora, who still appeared to be upset, approached a security guard in the stands near where the girl was sitting and spoke to the guard before the two embraced.

Alex Bregman doubled to start the Houston fourth before advancing to third on a single by Michael Brantley. The Astros cut the lead to 2-1 when Bregman scored on a sacrifice fly by Josh Reddick.

But the Astros had trouble stringing hits together apart from in that inning and went 1 for 5 with runners in scoring position as they played without injured stars Jose Altuve, George Springer and Carlos Correa.

"His ability to change speeds is elite," Hinch said. "His execution is up there with as good as we've seen this year. Just being able to throw the ball nearly exactly where he wants to. I haven't seen if he made any mistakes, but there weren't very many of them."

Miley yielded six hits and two runs while striking out a season-high nine in seven innings. The loss ended his four-game winning streak.

Cubs: Maddon said reliever Pedro Strop (hamstring) felt good after throwing one inning for Triple-A Iowa in the first game of his rehabilitation assignment. Strop is scheduled to throw another inning for Iowa on Thursday and could come off the injured list this weekend.

Astros: Correa is expected to be out four to six weeks after he says he fractured a rib during a massage at home. "To sustain an injury in such an unusual way makes it even more frustrating," he said in a statement. INF-OF Myles Straw was recalled from Triple-A Round Rock to take Correa's spot on the roster. ... Altuve is out indefinitely after experiencing fatigue and soreness in his surgically repaired right leg. Hinch said Altuve will do strengthening exercises and rehabilitation as he works his way back.

Cubs: Yu Darvish starts Friday in the opener of a three-game series at St. Louis. Darvish (2-3, 5.40 ERA) allowed 12 hits and six runs in a season-high seven innings of an 8-6 win against the Reds last time out.

Astros: Begin a three-game series at Oakland on Friday when Brad Peacock (5-2, 3.19 ERA) is scheduled to pitch. Peacock struck out eight over six scoreless innings in his last start but did not get a decision.