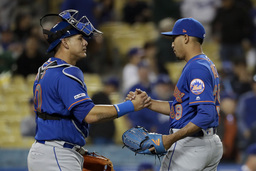 Conforto took some advice from Cano during a pitching change before his at-bat in the seventh and turned on an 0-1 pitch from Scott Alexander that lifted the New York Mets over the Los Angeles Dodgers 7-3 Tuesday night.

"He's going to try to get you to hit into a double play," Cano told Conforto.

The Mets outfielder went to the plate expecting that, but got a ball up in the zone and sent it into the left field pavilion to snap a 2-all tie.

"When I got back to the bench I told Robinson right in front of Chili (Davis) that he is going to be my hitting coach now," Conforto said. "I wasn't thinking about a slam but it feels good to do the job in that situation."

The Dodgers' bullpen imploded in the seventh taking over from starter Rich Hill. Yimi Garcia (0-2) and Dylan Floro gave up back-to-back walks. Amed Rosario hit a sacrifice bunt to Floro, who committed an error that loaded the bases.

Floro struck out J.D. Davis before giving way to Alexander, who served up Conforto's slam that put the Mets ahead 6-3.

New York tied the game 2-all in the fourth on Todd Frazier's leadoff homer, giving the team a home run in nine straight games.

Cody Bellinger gave the Dodgers their only lead in the third with his 20th homer, a two-run shot with two outs that made it 2-1. Their four-game winning streak ended.

He joined Gil Hodges as the only Dodgers in franchise history to reach the 20-homer mark through the first 55 games. Hodges had 21 homers in 1951.

"It's must-watch TV," Hill said of the attention paid when Bellinger comes to the plate. "He's putting together a tremendous season both offensively and defensively."

Conforto grounded into a fielder's choice to third that scored Mets starter Steven Matz (4-3) in the third for a 1-0 lead.

Rosario added an RBI triple with two outs in the eighth.

Matz gave up two runs and four hits in six innings. He struck out six and walked three in his third start since coming off the IL.

"It was the best I've ever seen Matz pitch," Mets manager Mickey Callaway said. "His breaking ball and change-up were working well and he got ahead of the hitters and did what he wanted to do. He's been really consistent and I think we turned the corner."

Hill allowed two runs and six hits in six innings, struck out six and walked one.

Dodgers: C Austin Barnes (left groin strain) will take a couple days off while waiting to be cleared to resume baseball activities. ... LHP Tony Cingrani (left shoulder) is due to be re-evaluated after suffering a setback during his rehab assignment.

C Will Smith made his major league debut for the Dodgers, starting behind the plate and getting two hits. In his first at-bat, he singled with two outs in the second off Matz and got to keep the ball. He doubled leading off the seventh. "It was awesome," he said.

Smith hit into an inning-ending double play in the eighth. He walked to the plate to the theme from "The Fresh Prince of Bel-Air," which starred actor Will Smith. The catcher from Louisville, Kentucky, was added to the roster a day earlier when Barnes went on the 10-day injured list. He worked with six pitchers in the game. "It's good to be thrown right in the fire," he said.

Roberts was impressed, saying, "You would never have guessed seeing him it was his first major league game."