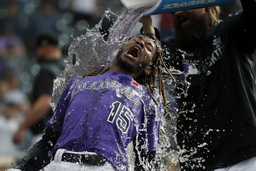 DENVER (AP) Raimel Tapia twirled his head to shake the water from his hair.

Turns out, it was Tapia's turn to get soaked in celebration.

Tapia singled in the winning run in the 11th inning to give the Colorado Rockies another dramatic victory, 4-3 over the Arizona Diamondbacks on Monday.

It was Colorado's third walk-off win in four games. The Rockies won two of three over the weekend against Baltimore in their final at-bat.

"You can't discount what we're doing. It's real," manager Bud Black said. "These are good at-bats late in the game."

Ian Desmond set up Tapia's clutch swing with a double that hit the top of the right-field fence and bounced into play. After a quick review to see if it was a homer, Desmond remained at second.

On the next pitch from Matt Andriese (3-3), Tapia hit a grounder through the middle for his second career game-ending RBI. He had barely taken one tiny step out of the batter's box when he lifted his right hand. Then he was doused in water and chalk, which he brushed from his uniform.

"I couldn't be any happier passing it on to Tapia, to get that situation," Desmond said. "This team has a lot of grit. We're grinding."

Tapia also made a diving catch of a sinking liner in the sixth that prevented some runs.

Colorado trailed 3-1 before Nolan Arenado's two-run single off Archie Bradley with two out in the seventh. Arenado is hitting .419 this month.

Just the sort of situation Diamondbacks manager Torey Lovullo was hoping to avoid.

"You get the wrong guy up in the wrong situation who's very hot right now," Lovullo said. "You're going to suffer and he made us pay."

The Diamondbacks dodged a dicey situation in the 10th after Ryan McMahon and Brendan Rodgers drew walks. Arizona escaped when McMahon was thrown out at third trying to advance on a pitch in the dirt.

Jarrod Dyson led off the 10th with a triple off the glove of Colorado's Ian Desmond, who had just entered in center. Bryan Shaw worked his way around it courtesy of three grounders.

"We're very frustrated," Lovullo said. "We thought we had that game."

The Rockies spoiled a stellar outing for a clean-cut Zack Greinke, who allowed one run and four hits over six innings after ditching his long locks. With Greinke gone, the Rockies capitalized on the bullpen.

Diamondbacks: RHP Luke Weaver has a strained forearm, Lovullo said, and will get a second opinion. He was placed on the 10-day injured list before the game. "We're remaining hopeful," Lovullo said.

Rockies: OF Charlie Blackmon was placed on the 10-day injured list with a strained right calf. The move is retroactive to May 24.

Rockies outfielder Yonathan Daza picked up his first major league hit with a blooper to right in the seventh. ... Rockies reliever Jairo Diaz surrendered Ahmed's homer on his 28th birthday. ... Rockies OF David Dahl lined a solo shot to center in the fourth for first homer since May 2. ... SS Nick Ahmed had a solo homer for the Diamondbacks, who were coming off a sweep in San Francisco where they matched a franchise mark for a three-game series by scoring 34 runs.

Colorado right-hander Jon Gray had a solid outing in his 100th career start. He went 5 1/3 innings and surrendered two runs before leaving with a hot spot on his middle finger.

"We want to be careful with it," Gray said.

Greinke had his full repertoire of pitches working, especially his off-speed offerings. He struck out McMahon on a 68 mph curve and Tony Wolters on a 66 mph pitch in the second. Greinke has 49 strikeouts on pitches 70 mph or slower since 2018, tops in the major leagues.

Diamondbacks right-hander Merrill Kelly (4-5, 4.75 ERA) will make his first career appearance against Colorado on Tuesday. The Rockies will throw righty Antonio Senzatela (3-4, 6.21 ERA), who is coming off the shortest start of his career. Senzatela allowed eight runs in 3 1/3 innings at Pittsburgh last week.