After Pérez's shoe delay, León and Boston sock it to Indians 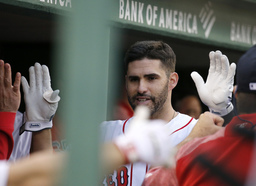 Sandy Leon hit a three-run homer off Perez after he caused an odd stoppage asking for new footwear, J.D. Martinez homered twice and the Red Sox beat the Indians 12-5 Monday.

Perez put Fenway Park into a strange delay when he relieved during Boston's six-run fifth inning. The 37-year-old left-hander noticed something amiss with his spikes while warming up and signaled for a replacement pair, leaving him milling about the mound in his socks while a trainer fetched fresh Nike's from the clubhouse.

He said after the game that the toe spike came loose when he was grooming the mound getting ready for the first batter he faced.

"It never happened to me before," he said. "It's kind of funny. It's part of the game."

Boston socked it to him after that. Jackie Bradley Jr. hit an RBI double to make it 6-3 after Perez retired the first batter, and Leon followed with his drive into the Green Monster seats.

"I heard he busted out of `em," said Bradley, who was on-deck. "I've never seen anything like that. I didn't actually see it, still. I was still trying to do my homework on him."

Rafael Devers and Xander Bogaerts had RBI doubles earlier in the inning against starter Jefry Rodriguez (1-5).

Leon, who is known for his defense and calling games behind the plate, came in hitting just .167 with one homer and five RBIs.

"He can say all he wants about the defense and calling games, that's what he cares about," Red Sox manager Cora said. "But not really, he wants to contribute offensively and today he did."

Bradley added another RBI double, and Mookie Betts and Bogaerts each had two hits and scored twice for the Red Sox, who have won 18 of 26.

Boston held a moment of silence and showed highlights of former player Bill Buckner, who died Monday. He was 69.

Red Sox second baseman Dustin Pedroia revealed before the game that he will take an indefinite leave in his long struggle to recover from knee trouble, putting in doubt whether he'll play again in the majors.

The Indians have lost seven of eight.

Oscar Mercado had two hits and three runs for Cleveland, but he's also likely to end up on blooper reels from Martinez's first home run. The drive banked off the top of the right field wall, hit Mercado in the glove and then fell into the bullpen.

Cleveland, which won the AL Central the last three seasons, entered the day 10 games behind surprising Minnesota. The Red Sox, who have three straight East crowns, began 6 1/2 behind the first-place Yankees.

Brock Holt's RBI single tied it in the fourth before Boston put up its big fifth.

Chants of "Let's go Bruins!" and "We want the Cup!" broke out late in the game. The Bruins were set to host St. Louis in Game 1 of the Stanley Cup Final on Monday night.

RF Betts and Indians CF Leonys Martin each made a diving catch.

Indians: Francona said RHP Corey Kluber was with the team because he lives in the area during the offseason and was doing "range of motion" exercises as he works his way back from a broken forearm suffered at the beginning of the month.

Red Sox: Pedroia was transferred from the 10- to 60-day injured list. His surgically repaired left knee has limited him to nine games the last two seasons. "Time will give me the right answer if my knee can do this," he said. ... Holt was activated from the 10-day IL before the game.

Red Sox: LHP David Price (2-2, 3.24 ERA) is scheduled to start. He left his previous one Saturday after throwing just 15 pitches due to illness.