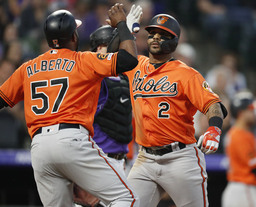 DENVER (AP) Andrew Cashner tried to give the tired Baltimore bullpen a breather, but fatigue ended his night early. Josh Lucas rescued him and his fellow Orioles relievers with a strong performance in a tough environment.

Lucas threw three shutout innings for his first career save and was backed by homers from Jonathan Villar and Renato Nunez in Baltimore's 9-6 win over the Colorado Rockies on Saturday night.

Villar and Nunez both finished with three hits and Pedro Severino had four hits to help the Orioles end a seven-game skid and overcome Nolan Arenado's big night. Nunez has homered in four straight games.

"The biggest thing tonight was Josh Lucas and how he did coming out of the bullpen," said Cashner, who came into Saturday 0-2 with a 7.94 in five career starts in Denver. "Three innings, his first save in the big leagues."

Lucas came through on a night Baltimore manager Brandon Hyde said only three relievers were available because of the amount of innings the bullpen has thrown of late. Miguel Castro gave up a solo home run in his lone inning but Lucas shut the door to help Cashner (5-2) get a rare win at Coors Field.

Lucas gave up a hit and walked one.

"Trying to pound the zone, trying to give the guys a rest," he said. "They've been taxed heavily this last week. Trying to eat innings."

Arenado had three hits, including his 200th career home run, and drove in the first five runs for Colorado. Chris Iannetta also homered for the Rockies.

Rockies starter Kyle Freeland (2-6) failed to pitch beyond the fourth inning for the second straight game and continued his rough start to the season. He won 17 games in 2018 but after starting this year with a win on opening day he is 1-6 and hasn't recorded a victory in more than five weeks.

Things started badly for the left-hander. Baltimore scored twice in the first and led 3-1 after Nunez's solo homer in the third. After Arenado's three-run shot in the bottom of the third gave Colorado a 4-3 lead, Villar answered with a three-run homer of his own on a full count to put the Orioles ahead 7-4 in the fourth.

"He's just not making a critical pitch at critical times," Rockies manager Bud Black said of Freeland "The backbreaker, the crusher, was the three-run homer. The 3-2 pitch was a breaking ball, Villar stayed back enough, got it airborne and hit it out."

Arenado continued his hot stretch in May. He didn't hit his first home run this season until April 14, in Colorado's 12th game, but he has hit eight this month, including two Friday night, to give him a team-high 14.

"I feel real good. I'm slowing the game down and slowing my body down," said Arenado, who raised his average to .333. "I'm putting together quality at-bats. I am trying to think too much into it."

Rockies: Charlie Blackmon was out of the lineup for the second straight game with a calf strain but Black said the outfielder is making progress. "He went through some activity in the training room and weight room and our trainers are encouraged," Black said. "No timetable but we're all encouraged that Charlie's feeling better and his activity level stepped up (Saturday)."

The Orioles had lost 12 of 14 with half of those losses by two or fewer runs so getting a rare win was a reason to celebrate despite the 16-36 record.

The dugout didn't relax until Trevor Story grounded out to end the game.

Baltimore RHP David Hess (1-6, 6.75) is looking for his first win since April 1st when he goes against Rockies righty German Marquez (5-2, 3.38) in the final of the three-game series on Sunday.