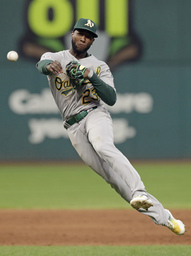 CLEVELAND (AP) Khris Davis' injury isn't getting better. The Athletics won't let it get any worse.

Oakland's slugger was placed on the injured list after the A's extended their winning streak to five games with a 5-3 win over the Cleveland Indians on Tuesday night. Pinch-hitter Mark Canha replaced Davis in the third inning and connected on a two-run homer off struggling Cleveland starter Trevor Bauer (4-3), who hung around for six innings despite early wildness.

Davis, who led the majors with 48 homers last season, has been slowed by a bruised left hip sustained on May 5 in Pittsburgh. Manager Bob Melvin has rested him whenever possible, but Davis said the injury isn't improving and it's time to shut down completely.

"It hasn't gotten worse, but it definitely hasn't gotten better, so it's the right move to hit the IL," Davis said. "It's basically pretty much the same since it happened. Every swing, I feel it. I think it's more of an oblique, but we'll see."

Davis was asked about his level of frustration.

Davis, who grounded out in his one at-bat, will undergo an MRI in Cleveland on Wednesday. Until they know more, the A's will have to survive without the biggest threat in their lineup.

"It hurts," said Canha, who has just five hits since coming off the injured list - four homers and a single. "Khris is beloved on this team and is a big presence for us, and obviously we need him back as soon as possible. Hopefully, it will be a short break and he'll be better because we need him."

Melvin expressed frustration at how long it's taken Davis to heal.

"Today, it got to the point where he realizes he needs to take the full 10 days off," Melvin said. "He's a power hitter, so he creates a lot of torque and that's where his power comes from. He needs his lower half. Even his BP swings haven't been great, but he was getting hits. Once he got into the game today, it got no better, so we agreed it was time to do something."

Meanwhile, the Indians have their own issues with Bauer, who hasn't stepped up the way the team needed him to while waiting for injured starters Corey Kluber and Mike Clevinger to return.

Bauer walked four, struck out five and hit three while throwing a season-high 123 pitches. The right-hander is at a loss to explain why he's not getting results.

"Overall, I thought my stuff was really good tonight," he said. "Gave up four hits. Curveball on the black goes for a bloop hit and then five pitches later a fastball at the letters goes for a homer. I think that's just the kind of the way things are going for me right now."

Jurickson Profar homered in the eighth as Oakland improved to 7-1 against AL Central teams this season. The A's are 59-20 vs. Cleveland, Chicago, Minnesota, Detroit and Kansas City dating to Aug. 23, 2016.

With Bauer struggling to find his rhythm, Canha hit his third career pinch-homer to give the A's a 3-1 lead in the third. Canha fell behind 1-2 before reaching out of the strike zone to push a four-seam fastball over the wall in right.

"When you get thrown into a situation like that, you've just got to simplify," he said.

Indians catcher Roberto Perez was diagnosed with a concussion after he was struck in the mask by a foul ball in the third inning. Manager Terry Francona said the team will wait until he reports Wednesday before deciding whether to put him on the concussion. The Indians will bring catcher Eric Haase from Columbus as a precaution.

Athletics: LHP Brett Anderson (neck strain) appears on track to make his next start after he ducked to avoid Roberto Perez's broken bat in the fifth inning Monday night. Anderson came out an inning later. "I hope it doesn't affect his bullpen session, let alone his next outing," Melvin said.

Indians: Clevinger threw an extended bullpen, using all his pitches in the latest stage of his rapid recovery from an upper back strain. Francona said Clevinger could throw another bullpen session or possibly face live batters in his next workout.

Athletics: RHP Frankie Montas (5-2, 2.67 ERA) starts the series finale. He struck out 10 and did not allow a walk last week in a win over Detroit.

Indians: RHP Jefry Rodriguez (1-3, 3.45 ERA) tries to bounce back after being tagged for a season-high four runs and seven hits last week against Baltimore. He beat Oakland on May 11 for his first win with Cleveland.