Soroka, Acuña lead Braves to a 4-1 victory over Giants 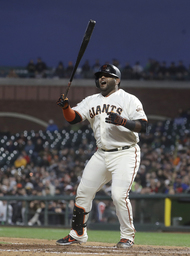 The Braves rookie right-hander had his season delayed by a shoulder injury suffered working out in spring training. There will be plenty of time for All-Star talk, but the way Soroka is pitching a strong case could be made.

"I'm really just trying to put one foot in front of the other and make every start," Soroka said. "All-Star break's a long ways away and a lot of starts to go until then. I'm just going to keep doing what I've been doing. If that happens it'll be unbelievable (but) that's something that's not even worth thinking about right now."

Soroka (5-1) struck out seven and allowed one run and two hits in eight innings. The right-hander has allowed one earned run or fewer in all seven starts this season. His ERA rose from 0.98 to 1.01.

The 21-year-old Soroka retired the first 15 batters with relative ease before Brandon Crawford led off the sixth inning by hitting the first pitch to straightaway center field for a homer.

"The way he keeps pitching is something else," Braves manager Brian Snitker said. "The maturity shows. It's really impressive watching him work. He's one of those guys, you don't know if he's five up, five down or what the score is. He just keeps pitching and making pitches."

Atlanta second baseman Ozzie Albies helped preserve Soroka's gem, making a running catch with his back to the infield on a fly ball to short center field by Kevin Pillar that ended the fifth inning.

Austin Riley also homered for the Braves, who won the opener of a seven-game trip and have won eight of 11.

"It's nice because we have such a nice blend of young players and veterans," Acuna said through a translator. "It's nice to be a part of that. I'm just trying to focus on winning. That's really the most important thing that we're all striving to achieve."

Acuna homered again in the seventh off Nick Vincent. Atlanta is 8-2 since Acuna was moved into the leadoff spot on May 10.

"I don't know what it is but he's just kind of a different guy there," Snitker said. "There's something about that spot there that he kind of comes alive."

Riley's two-run home run came off Suarez in the sixth, following a walk to Nick Markakis.

Suarez allowed three runs and four hits in six innings in his debut. The left-hander, who was called up from Triple-A Sacramento before the game, walked four and struck out five.

Suarez's only career win came against Atlanta on May 6, 2018.

"He was a strike away from a great start," Giants manager Bruce Bochy said. "He lost Markakis and then had the next hitter 0-2 and just hung a breaking ball. He gave us a chance to win the game, but offensively, we just got completely shut down."

The Giants played without a true backup shortstop after the team optioned infielder Donovan Solano to Sacramento to make room for Suarez. Manager Bruce Bochy indicated that third baseman Evan Longoria or second baseman Joe Panik could be used there, if needed.

"Of course Pablo (Sandoval) could, too," Bochy said, referencing the two-time All-Star who has evolved into the Giants' utility player. Sandoval started at third in place of Longoria.

The Braves added veteran help for their patchwork bullpen by acquiring right-hander Anthony Swarzak from Seattle for left-hander Jesse Biddle and right-hander Arodys Vizcaino. As part of Monday's trade, Seattle is sending Atlanta $1.78 million to cover about one-third of the $5.67 million remaining in Swarzak's $8 million salary this year.

The 33-year-old Swarzak has a 5.27 ERA and three saves in six chances this season for the Mariners. He had an 8.64 ERA in his last nine appearances.

San Francisco acquired minor league pitcher Matt Seelinger from Tampa Bay as the player to be named later in the deal that sent catcher Erik Kratz to the Rays last week. Seelinger will report to Class-A Augusta.

Giants: Longoria was held out of the starting lineup. He flew out as a pinch-hitter in the ninth.

Atlanta RHP Julio Teheran (3-4, 3.88 ERA) pitches Tuesday in his first start against San Francisco since 2013. Teheran is going for back-to-back wins after ending a three-game losing streak with five scoreless innings against St. Louis on May 16. Right-hander Shaun Anderson (0-0, 3.60) makes his second career start for the Giants. Anderson allowed three runs (two earned) in five innings in his major league debut against Toronto on May 15.