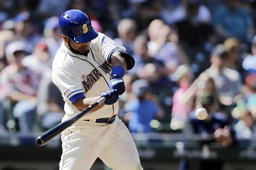 SEATTLE (AP) The Seattle Mariners expected Edwin Encarnacion would make an impact with his bat this season.

His glovework, that's been a bonus.

Encarnacion made several nice plays at first base early in the game, then hit a three-run homer in the seventh inning that helped the Mariners beat Minnesota 7-4 Sunday, snapping the Twins' five-game winning streak.

Mitch Haniger and Daniel Vogelbach hit back-to-back homers as the Mariners ended a three-game skid, a day after an 18-4 drubbing.

Yusei Kikuchi (3-1) gave up one earned run in six innings, striking out six.

Primarily a designated hitter in recent seasons, the 36-year-old Encarnacion has been getting a lot of time in the field since being traded to Seattle in December.

Encarnacion cut across the diamond for a diving grab in the second inning and made a running, basket catch in foul territory in the third. He also stretched out twice to handle difficult throws for outs.

Haniger hit a two-out, two-run homer in the fifth that made it 3-all and Vogelbach followed with his 13th home run off Kyle Gibson (4-2).

Encarnacion provided a cushion with his 13th homer.

"He's just a quality impactful hitter in the middle of the lineup for them and it's not surprising to see him to good things, driving the ball, and having good at-bats," Twins manager Rocco Baldelli said.

Jorge Polanco had four hits for the Twins.

The Mariners continued to remake their bullpen, promoting RHP David McKay from Triple-A Tacoma on Sunday and designating Mike Wright for assignment. Seattle acquired Wright on April 24 after Baltimore cut him, hoping he could add depth to an inexperienced bullpen that's given away games this season. But he allowed 11 runs in 11 innings. Seattle manager Scott Servais said the team would like to have him back if he clears waivers.

McKay was available immediately to a pitching staff that's reeling. Seattle gave up 40 runs in the four-game series against Minnesota.

Twins: RHP Jake Odorizzi (6-2, 2.63 ERA) goes for his seventh win in a row after victories in each of his last six starts as Minnesota plays at the Los Angeles Angels on Monday night.